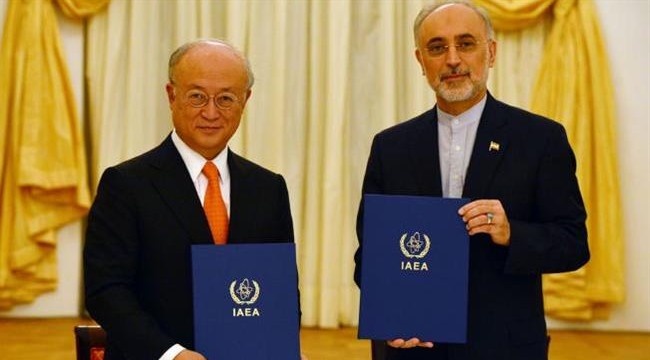 Tasnim – Head of the Atomic Energy Organization of Iran (AEOI) Ali Akbar Salehi and the chief of the International Atomic Energy Agency (IAEA) held a meeting in the Austrian capital of Vienna to discuss the implementation process of the 2015 nuclear deal between Tehran and world powers.

Salehi and Amano held the meeting on Monday on the sidelines of the 61st General Conference of the International Atomic Energy Agency in Vienna.

Earlier in the day, addressing the general conference, Salehi slammed recent calls by the US government to inspect Iran’s military sites under false pretexts and said the US ambassador to the United Nations, Nikki Haley, made a “host of unjustifiable, peculiar demands” in talks with Amano in Vienna last month.

Haley’s demands are “far beyond the purview of the JCPOA and its collectively negotiated and well-defined provisions,” Salehi said.

“We remain confident that the (UN atomic) agency, and for that matter the director general, will resist such unacceptable demands,” he stressed.

“The American administration’s overtly hostile attitude and actual foot-dragging policies and measures aimed at undermining the nuclear deal… are contrary to the letter and spirit” of the JCPOA, Salehi said.

In August, Haley traveled to Vienna to press the UN nuclear chief on her reading of Iran’s compliance with the JCPOA and asked if the IAEA planned to inspect Iranian military sites, something she has called for.

In a letter dated August 19 but released on August 23, Iran’s Foreign Minister Mohammad Javad Zarif warned about US lack of adherence to the nuclear deal.

Zarif has also said that Haley’s visit to the IAEA undermines “the independence and credibility” of IAEA inspectors.

Iran and the Group 5+1 (Russia, China, the US, Britain, France and Germany) reached the 159-page nuclear agreement, also known as the Joint Comprehensive Plan of Action, in July 2015 and implemented it in January 2016.