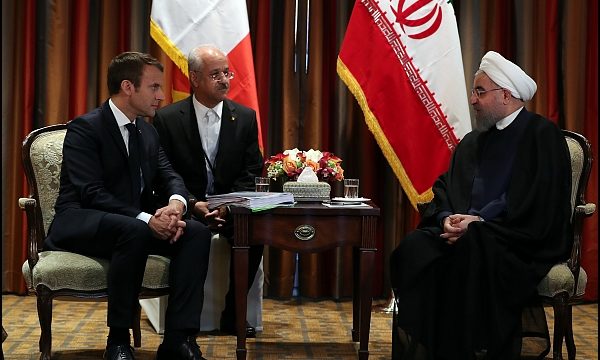 September 19, The Iran Project – Since his arrival in New York on Sunday (Sep 17) to attend and address the 72nd session of the United Nations General Assembly, President Hassan Rouhani has conferred with a number of his counterparts from France, Austria and Bolivia and Swedish prime minster as well as UN secretary general.

In a meeting with Bolivian President Evo Morales which held on the sidelines of UN General Assembly’s session, President Rouhani voiced Iran’s interest to improve cooperation with Latin American countries such as Bolivia, saying that Iran welcomes promoting relations with them in all arenas.

Morales, for his part, also described Iran as a friendly country, saying that Bolivia is determined to intensify cooperation with Iran in all fields.

Van der Bellen called for promoting of cooperation between Tehran and Vienna in all areas, urging Austria to participate in the Iranian market.

In a meeting with Guterres, Rouhani said that the July 2015 nuclear deal between Tehran and the major world powers could serve as a good model for bolstering of peace and stability both in the region and across the world, underscoring that the UN and International Atomic Energy Agency (IAEA) play a pivotal role in safeguarding and bolstering the nuclear deal, known as Joint Comprehensive Plan of Action (JCPOA).

Guterres, for his part, urged all parties involved in the JCPOA to be committed to the landmark nuclear deal and implement the deal fully and accurately, describing the JCPOA as a pivotal step for safeguarding peace, adding that all sides should maintain the deal.

Talking to his French counterpart Emmanuel Macron, Presdient Rouhani said the JCPOA conveyed this message that complicated international issues could be resolved through negotiations and in a win-win framework, and any damage to it could transmit this dangerous message to the world that diplomacy cannot settle problems.

Macron said that Paris was committed to and supported the nuclear accord, calling for the full implementation of the JCPOA, adding that any renegotiation of the agreement would be “meaningless.”

Rouhani also sat down with Swedish Prime Minister Stefan Löfven in New York, where he described the JCPOA, as an international agreement conducive to regional and global security and stability.

The Swedish premier said that the JCPOA should not be undermined and underscored the need for its full implementation and the removal of restrictions on business with Iran, expressing satisfaction with the IAEA reports confirming Iran’s compliance with the JCPOA, saying that all parties to the accord should live up to their obligations.