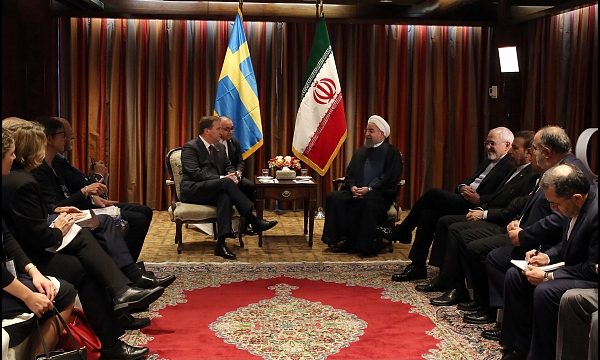 Tasnim – Iranian President Hassan Rouhani denounced the situation of Rohingya Muslims in Myanmar as “shocking” and renewed his call for international pressures on the government of the Southeast Asian country to stop “the genocide”.

“Muslims in Myanmar are facing dreadful conditions and 400,000 innocent people have been displaced,” President Rouhani said in a meeting with Swedish Prime Minister Stefan Lofven in New York on Monday on the sidelines of the 72nd regular session of the United Nations General Assembly.

“Pressuring the Myanmarese government to stop genocide and violence against Muslims is a necessary measure,” he noted.

The president went on to say that undoubtedly, the European Union can play a major role in resolving the humanitarian crisis in Myanmar and assisting the Rohingya refugees.

The Swedish premier, for his part, described the Myanmar as a “tragedy” and said Sweden will do whatever it can to help in this regard.

On September 12, 2017, the UN refugee agency said the number of Rohingya Muslim refugees that have fled recent violence in Myanmar has spiked to about 370,000.

Zeid Ra’ad al-Hussein, the UN high commissioner for human rights, said the military’s “brutal” security campaign was in clear violation of international law, and cited what he called refugees’ consistent accounts of widespread extrajudicial killings, rape, and other atrocities.