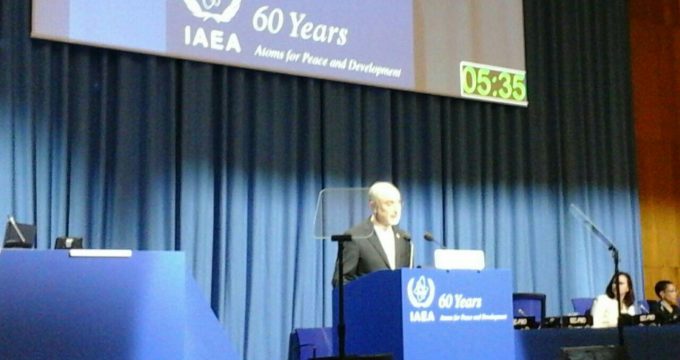 Iran: US moves in violation of nuclear deal

IRNA – US hostile behavior in denying Iran its benefits under the nuclear deal is against the letter and spirit of the deal, Iran’s nuclear chief said on Monday.

Iran’s nuclear activities are being done with maximum transparency with the complementary access to the nuclear sites, Ali Akbar Salehi, head of Atomic Energy Organization of Iran said in a speech on the first day of the 61st International Atomic Energy Agency (IAEA) General Conference in Vienna.

All signatories to the deal should be held accountable for their commitments, he added, referring to the US attempts to hinder the full implementation of Iran’s nuclear deal.

Iran and the five permanent members of the UN Security Council signed the historic nuclear deal in 2015. Despite frequent confirmation reports of the IAEA and the US on Iran’s showing commitment to its obligations, the US President Donald Trump has repeatedly vowed he would cancel or revise the deal.

Any move or measure for undermining or neutralizing the deal, with any pretext or politically motivated reason, will damage the historic deal and endanger it to the detriment of the entire international community, not just the parties to the deal, the Iranian Vice-President said.

The 61st IAEA General Conference kicked off on Monday in Vienna, Austria. At the week-long annual conference representatives from 168 member-states will talk about various topics related to the nuclear issues.