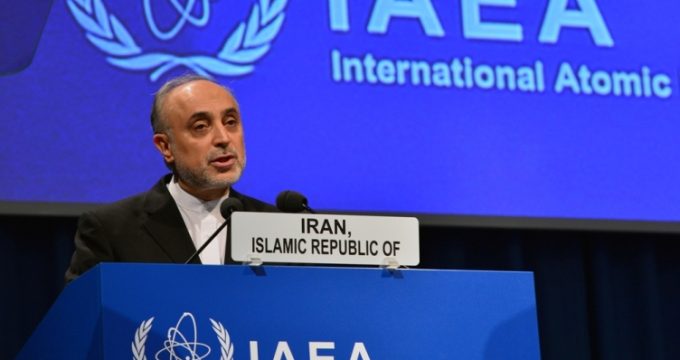 The IAEA General Conference kicked off on Monday in Vienna, Austria. At the week-long annual conference representatives from 168 member-states will talk about various topics related to the nuclear issues.

The full text of Iranian nuclear chief’s speech is as follows:

It is a distinct pleasure to join all of you for the 61st Session of the General Conference, this year, a Green Meeting, a great, timely, and future-looking practical idea. At the outset, I would like to seize the opportunity to congratulate you, Excellency Mrs. Maria Collinson, for your deserved election to the presidency of the Conference.

It is also a pleasure to see H.E. Mr. Yukiya Amano re-elected for another term to lead the Agency. We wish him every success and as always assure him of full cooperation, to effectively discharge his quite heavy, difficult, and challenging responsibilities.

I would also like to welcome Grenada as a new member of the IAEA.

The General Conference as a highest policy making body provides an opportune annual occasion to direct the agency to “accelerate and enlarge the contribution of the atomic energy to peace, health and prosperity throughout the world”. It is within the framework of this brief, overall picture of the Agency’s Major Programme and Work that I would like to present to you and the General Conference our outlook and activities in a number of selected areas.

Within the framework of pursuing a peaceful nuclear program, Iran has relied on its developing infrastructure and technology as well as on its young and highly-talented manpower, both for power generation and other peaceful applications, including health and agriculture. Having introduced nuclear energy in the country’s energy mix with the full utilization of the first unit of the Bushehr Power Plant, plans are already underway to increase the share through the construction of second and third units – also an important step towards reduction of greenhouse gas emissions at the national level. In addition, our radiopharmaceutical products are being exported to the neighboring and remote countries in recent years. Also as a result of a serious campaign against the plight of cancer, thanks to the technical cooperation with the Agency, Iran has made great valuable achievements. My country is looking forward for an extended cooperation in this field.

Moreover, the achievement of significant advances of my country in various fields of fission and fusion technology has created the necessary basis for actual engagement in mutual and trilateral fruitful cooperation with both developed and developing international partners, and in the framework of IAEA technical cooperation programs.

One of the most important aspects of all our activities relates to the implementation of the Joint Comprehensive Plan of Action (JCPOA) since it went into effect in early 2016. As confirmed by the Agency’s periodic reports, Iran has honestly and in good faith fulfilled all its commitments under the deal. It is worth mentioning that the nuclear activities of my country are carried out under utmost transparency, including numerous inspections and complementary access to its nuclear sites. Having no time to delve into an in-depth analysis of the unacceptable difficulties and obstacles created by one of the participants on the full implementation of JCPOA, I merely suffice to draw your attention to the fact that, the integrity of the nuclear deal must be adhered to and preserved by all its participants. All participants, without any exception, must be held accountable in this regard; each and every party must faithfully comply with its commitments in order to keep it intact, on track, and operational.

Any action or measure to weaken or nullify the provisions of the nuclear deal, under any pretext or politically-motivated and self-serving excuses, will certainly undermine and jeopardize this historic achievement, not only to the detriment of its participants, but in fact to that of the entire international community. I would also find it necessary to allude, though very briefly, to the recent American demarche at the Agency with a host of unjustifiable peculiar demands with regard to the verification of our strictly peaceful nuclear programme far beyond the purview of JCPOA and its collectively negotiated and well-defined provisions. The American administration’s overtly hostile attitude and actual foot-dragging policies and measures aimed at undermining the nuclear deal and blocking Iran’s legitimate benefits from its full and unimpeded implementation are contrary to the letter and spirit of JCPOA. We remain confident that the Agency, and for that matter, the Director-General, will resist such unacceptable demands and continue to execute the Agency’s irreplaceable technical supervisory role with strict objectivity, fairness and impartiality, including protection of sensitive, technical and industrial information attained through inspections. The Agency’s success in this important and critical challenge will benefit everybody and enhance its international credibility. Serious and active cooperation of other participants to the deal, and in a larger sense, the members of the IAEA, will indeed make a positive contribution to this end.

Success in achieving global nuclear security, first and foremost, calls for the effective compliance of nuclear-weapon states with their obligations under NPT, including through desisting discriminatory approaches and policies. We have always believed, as a matter of principle, that meaningful promotion of global and regional peace and stability hinges, inter alia, on the strengthening of the nonproliferation regime. To accomplish this task, the necessity for creating a nuclear weapon-free-zone in the Middle East ties well into the global and regional campaign ever since in exerting pressure on the Israeli Regime to put an end to its illegitimate nuclear weapons program and adhere to the NPT.

Regarding nuclear safety, we strongly believe in the imperative of strengthening the relevant safety standards as a matter of high priority. In this regard, we have already achieved considerable advancement. For example, our Bushehr Power Plant has been promoted on the WANO safety assessment scale. Having already embarked on enhancing capabilities of the Iran Nuclear Regulatory Authority project, including the establishment of a nuclear safety center in Iran with international cooperation, plans are under way to develop a reliable hub for regional cooperation in this field. Additionally, it is my pleasure to announce that recently the bill of accession to the ‘Joint Convention on the Safety of Spent Fuel Management and on the Safety of Radioactive Waste Management’ is brought before the parliament for ratification after having recently been approved by the government.

On a somewhat closely-related issue, ‘we are of the view that measures to strengthen nuclear security should not hamper international cooperation in the field of peaceful nuclear activities and promotion of peaceful uses of energy’, including technical cooperation program. In the meantime, as a victim of cyber terrorist attacks against our nuclear installations, ‘we believe that the most effective mechanism tackling such terrorist threats entails strong international cooperation’. Likewise, ‘we are also seriously concerned with the question of nuclear security consequences ensuing from terrorist threats. It is therefore imperative to strengthen the existing mechanisms and measures at the national and international levels.

Alongside the sovereign right of member-states, strengthening the role of the Agency should go hand in hand with ensuring full respect for the responsibilities of the national nuclear security which naturally rests entirely with the state.

I conclude on a note of paying tribute to the valuable work of the Agency towards contributing to the promotion of prosperity, development and welfare for humanity. We look forward to a day when the motto of peaceful use of nuclear energy for all and the use of nuclear weapon for none, is universally recognized and materialized.

Thank you very much for your attention.