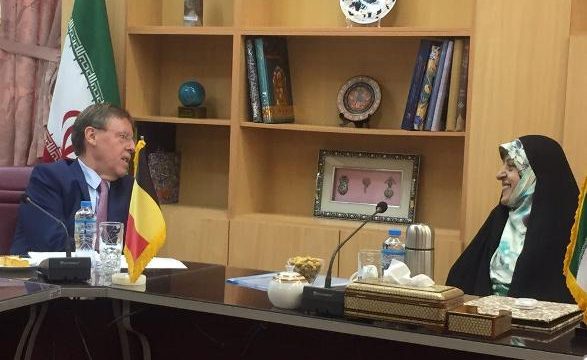 IRNA – Vice-President for Women and Family Affairs Masoumeh Ebtekar says economic and trade cooperation between Iran and Belgium and their commonalties are of special significance.

Speaking to speaker of the Belgian House of Representatives Siegfried Bracke in Tehran on Saturday, Ebtekar said cooperation to scale down terrorism and violence in the region and certain European countries is among priorities of Iran’s cooperation.

She said Iran’s scientific and technological achievements have been very effective and these stand as an opportunity for expansion of cooperation.

Ebtekar referred to progress in the fields of women and family, and said women accounted for 35 percent of the literate population in Iran in after victory of the IslamicRevolution in 1979, but the figure has now reached 85 percent.

She added that furthermore, women account for half the academics and efforts are underway to offer 30 pe
rcent of managerial posts to women in Iran.