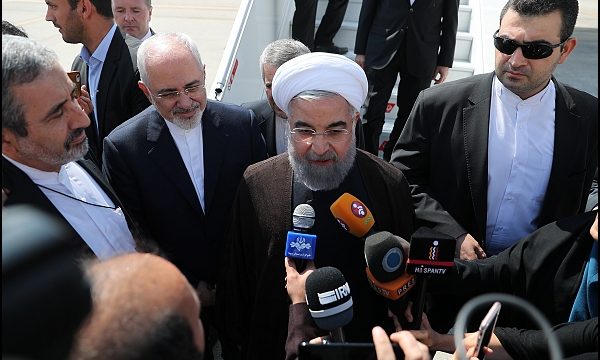 Rouhani made the remarks Sunday while arriving at John F. Kennedy International Airport in New York.

‘During the visit, we will hold meetings with heads of countries, elites, senior clerics of Islamic countries, US media and Iranians in New York,’ he said.

He expressed hope for the meetings to benefit Iran’s interests and for taking major strides to establish international cooperation.

President Rouhani has an intensive agenda during his visit to New York which includes an address to the UN General Assembly meeting to outline Tehran’s latest positions on different regional and international issues, particularly the tragic situation of Muslims in Myanmar.

The President had also raised the issue of Muslims in Myanmar during his speech last week at a meeting of the Organization of the Islamic Cooperation (OIC) in Kazakhstan.

President Rouhani will also hold talks with the heads of the US foreign policy think thanks and scholars as well as the senior officials of the international media, meet with UN Secretary General Antonio Guterres and hold separate meetings with a number of heads of states from other participating countries.

The UNGA meeting will be underway until September 25 and heads of states will deliver speech in the meeting.

Hassan Rouhani, Iran foreign policy, Rouhani visit to New York September 17, 2017
Iran is in technical compliance of the nuclear arrangement: US Tillerson
What’s the walnut city of Iran and why is it so famous?