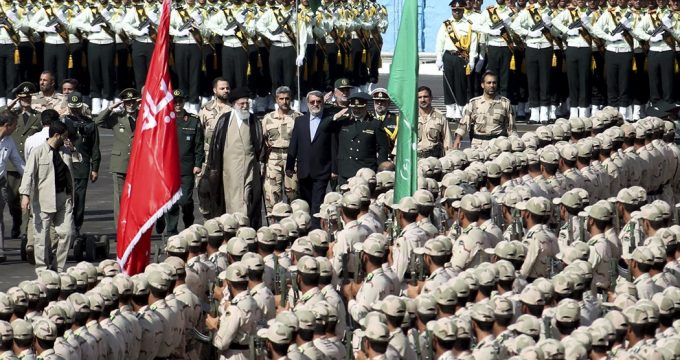 Iran will respond to any ‘wrong move’ on JCPOA: Leader

Press TV- Leader of the Islamic Revolution Ayatollah Seyyed Ali Khamenei has warned that Iran will stand on its “honorable and dignified positions” regarding its nuclear accord with the P5+1 group of countries, known as the Joint Comprehensive Plan of Action (JCPOA), and respond to any “wrong” move.

“The Iranian nation has stood firmly and any wrong move by the hegemonic system on the JCPOA will draw a reaction from the Islamic Republic,” the Leader said at a graduation ceremony of Iran’s police cadets in Tehran on Sunday.

Referring to American officials’ “brazen and shameless” measures with regard to the JCPOA, the Leader said, “They show one wickedness and one mischief with regard to this issue everyday, which proves that what our honorable Imam [Khomeini] said about America being the Great Satan is true and the regime of the United States of America is really the most evil of devils.”

Ayatollah Khamenei stated that Iran started its nuclear program, because according to experts’ estimates, the country needed to generate at least 20,000 megawatts of nuclear power, but the United States opposes Iran’s nuclear program as it is basically opposed to scientific progress of the Iranian nation and other nations.

“The country’s officials reached the conclusion that they should negotiate and ignore some of their rights, so that, sanctions [imposed on Iran on account of its nuclear program] would be removed. but today, we see that despite all agreements and promises and many discussions during [nuclear] negotiations, America treats these negotiations and their outcome in a totally oppressive and bullying manner,” the Leader noted.

The Leader added that in the face of the United States’ measures to scuttle the nuclear deal, Iranian “officials must prove to the corrupt leaders of the regime of the United States of America that they rely on their own people and the Iranian nation, which is a powerful nation thanks to Islam, will never submit and bow to them.”