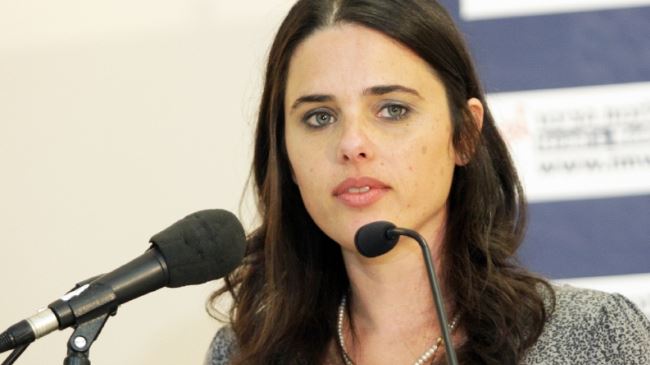 Israel threatens war with Syria over Iranian presence in the country

American Herald Tribune | Robert Inlakesh: Ayelet Shaked, the Justice Minister of Israel has just threatened the Syrian government stating that Israel “will do what is necessary” if Syrian President Bashar al-Assad does not keep Iran out of Syria.

The Israeli government – who last week bombed a Syrian military outpost, killing two soldiers – have now verbally challenged the Syrian government in the form of offering an ultimatum. The threats towards Syria come a time when the Assad government forces have all but extinguished the presence of Daesh in Syria and are coming close to completely ending the war. Israel meanwhile seem to be having an anxiety attack over the current situation and have been beating hard on the drums of war.

In Netanyahu’s most recent meeting with Russian president Vladimir Putin, he frequently sought to voice his concerns over Iran, this was then – to Netanyahu’s frustration – brushed under the rug by Putin as it was viewed as a non-substantial issue. A paranoid Israeli government have meanwhile been busy preparing for war with pretty much every enemy they can since that meeting took place and don’t seem to be very happy with the way things are turning out in Syria, with the strengthening of the ‘axis of resistance’.

The Israeli Military is now notably brought it’s week long series of military drills – which included an simulated invasion of Lebanon – to a halt, this was Israel’s biggest military drill since 1998 (when they simulated an invasion of Syria). For any other country, such a drill as the one started on the 5th of this month would be be seen as a possible threat to national security and/or a provocation of war for the country being threatened, however Israel seem to be able to do this whilst coming under no scrutiny from the international media, nor the international community. Last month on the 10th of August, the Israeli government announced that they were in preparation for a ground invasion of Gaza, the Israeli air-force also have been performing several fly overs of Lebanese air space and have been calling for and discussing the prospect of waging war against, Iran, Syria, Gaza and of course Lebanon frequently in their media.

So should we expect something big from Israel?

Well let us look at the possibilities; The Israeli government are constantly threatening to take their sworn enemies to war and have been doing so since their inception in 1948, but the prospect of taking Syria into a war at this time could mean a global conflict and would result in huge casualties on the side of the Israelis, as well as on the side of their opposition.

Historically Israel have never liked taking large casualties and ended their most recent onslaught on the Gaza strip (2014) primarily because of this reason.

Israeli society completely endorse war with an enemy and opinion polls from within Israel show an increased support for the elected political party when they engage in war, so for Netanyahu’s Likud party, war would seem like a good idea in order to regain some of their recently lost popularity back from far-right Israeli parties. However, when soldiers begin to die, Israeli public opinion begins to flip and becomes more critical of the government, the reason Israel ended the onslaught upon Gaza in 2014 was due to the fact that in order to take the fight to the heart of Hamas, it would mean a ground invasion. Every ground confrontation with Hamas had ended in dead and wounded Israeli soldiers, so because Netanyahu and his party understood that they would loose support from many Israelis, they decided not to go ahead with it.

If Israel were to at this moment start a conflict, it would most likely be with Hamas in Gaza or Hezbollah in Lebanon, a war in Syria is most likely Israel just attempting to get the attention of allies, so that they can broker a deal in Syria which would see the decline of Iranian presence.

The leader of Hezbollah Sayyed Hassan Nasrallah this Tuesday announced that the war in Syria has been won by the Syrian government, this means that Hezbollah are confident that their fighters will be soon ready to face off against Israel in full force and Israel know this. For Israel, these are not confident times and a war on Syria or Lebanon could mean heavy casualties. It is more than likely Israel would seek to achieve a conflict between ethnic-religious factions in Lebanon as a more strategic goal of weakening Hezbollah, this would be a more well thought out move for the state to play than a straight up conflict and could be a possibility they are considering as their relationship with Saudi Arabia and Gulf Arab countries get stronger.

The statement made by Ayelet Shaked – although most likely won’t be acted upon – is still something that has to be noted and shows that Israel are at least willing to consider such dangerous moves militarily. Ayelet – who gained international recognition for her racially charged statements about Palestinians – also recently voiced her support for an independent Kurdish state in Syria, stating to ‘Haaretz’ (an Israeli newspaper) that “Israel as well as western states will have great benefits from the creation of a Kurdish state.” She is tipped to be a possible future Prime Minister of Israel due to her popularity and someone who is so willing to challenge neighboring countries is a dangerous person to have in government, it is also now clear from her statements that Israel have a clear cut view on how to deal with the situation in Syria (via the Kurds).

Ayelet Shaked, Iran, Israel, Syria crisis September 16, 2017
Iran’s coverage: Iran possesses bomb which dwarfs US’ ‘MOAB’
Why ‘US will shoot itself in the foot’ in case of new sanctions against Iran