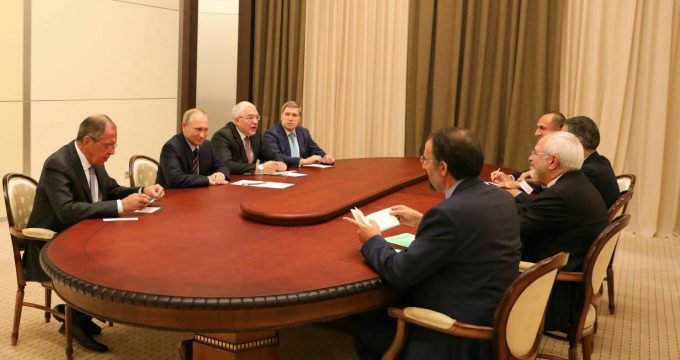 Leaders of both countries aim to develop relations, he said.

Both countries also stressed on JCPOA as a non-negotiable accord and also on the need to follow up commitment by all parties, he added.

Zarif went on to say that Iran has so far been committed to nuclear deal, but unfortunately some parties have not remained committed.

‘We also held talks on Syria, we had good cooperation in fighting terrorism and in safeguarding the country,’ he said.

‘We will continue Syria talks with the attendance of Turkey in Astana, Kazakhstan within days,’ Zaif added.

He referred to preventing tensions in Persian Gulf as Iran’s goal.

He reiterated that Caspian Sea Legal Regime is in its final stage.

The coincidence of the meeting with the sixth round of Astana peace talks on Syria crisis has increased the importance of these negotiations.

Some Western and Arab countries, led by the US, caused scores of thousands of extremist terrorists, enjoying advanced weaponry and financial and intelligence support, to enter Syria 6 years ago, in order to bring down the Syrian government.

The anti-Syrian actions created tens of terrorist groups that resulted in massacre and displacement of hundreds of thousands of innocent people in Syrian and Iraq, and also destruction of the two countries, but certain Western and Arab countries keep supporting the armed oppositions and terrorists.