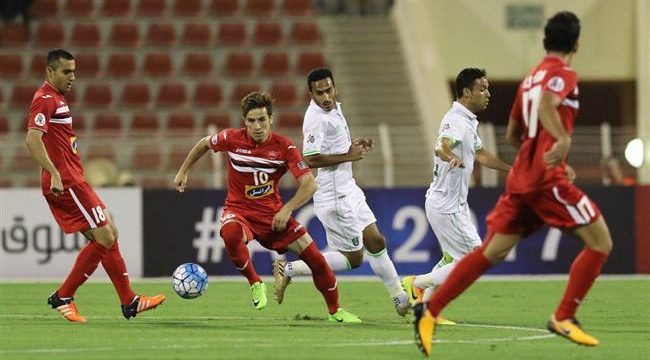 Persian Gulf – Iran’s Persian Gulf Pro League professional soccer club Persepolis has clinched an emphatic win against Al-Ahli of Saudi Arabia in the quarterfinal round of the 2017 Asian Football Confederation (AFC) Champions League, and advanced to the next stage of the tournament.

On Tuesday evening, the Iranian soccer players succeeded to defeat the Saudi side 3-1 at the end of a fixture played at the multi-purpose al-Jazira Mohammed bin Zayed Stadium in Abu Dhabi, the United Arab Emirates.

Persepolis soccer players opened the match with vim and vigor, and approached their opponents’ goal early into the game.

Persepolis 23-year-old Ali Alipourghara took advantage of an ideal opportunity in the fifth minute to put his side on the scoreboard.

In the 11th minute, Persepolis midfielder Kamal Kamyabinia was shown a red card for committing a clear foul on an Al-Ahli player.

After that, Al-Ahli footballers built up pressure on Persepolis goal in the hope of drawing level but to no avail.

It was in the 42nd minute that Persepolis 29-year-old midfielder Vahid Amiri had a wonderful chance to double the Iranian club’s lead, but simply turned it down.

After the interval, Al-Ahli players tried hard to level the match. Their efforts finally paid off in the 52nd minute, when forward Saleh al-Amri found the back of Persepolis net.

The Iranians then moved forward and launched a number of attacks on Al-Ahli’s goal in search of a goal.

Perespolis forward Mehdi Taremi was brought down in the box in the 56th minute, but the referee refused to point to the penalty spot, prompting strong objection from Iranian footballers. Vice Captain Hossein Mahini received a yellow card for his protest.

In the 80th minute, Persepolis was awarded a penalty after an Al-Ahli player committed a foul with his hand. Nigerian striker Godwin Mensha converted the chance to put Iran ahead.

In the dying moments of the match, Taremi placed a penalty kick at the bottom of Al-Ahli’s net and snatched a glorious 3-1 victory for Persepolis.

Persepolis is scheduled to face Al-Hilal of Saudi Arabia in a semifinal showdown on September 26.