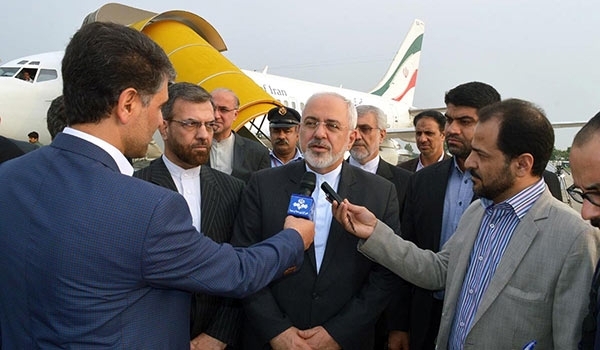 FNA- Iranian Foreign Minister Mohammad Javad Zarif praised Russia for taking side with Tehran in the implementation of the 2015 nuclear deal against Washington’s antagonistic efforts against the internationally-endorsed agreement.

“Given the recent US policies, coordination between Iran and Russia is necessary and this coordination has existed so far and the two countries have supported each other in international organizations and in multilateral relations and Russia has very well supported Iran in the nuclear deal,” Zarif told reporters upon arrival in Sochi on Wednesday for talks with the Russian officials.

Russian Foreign Ministry stated in February that the country is concerned over Iran’s possible withdrawal from 2015 nuclear Deal.

Mikhail Ulyanov, the head of the ministry’s Department for Nonproliferation and Arms Control, said “there are indeed concerns because we see rather harsh rhetoric from the US administration and Tehran’s reciprocal tough rhetoric.”

“You ask if there is a threat of Tehran’s withdrawal? I believe that such an outcome would be a major failure for the entire international community,” Ulyanov said.

Elsewhere, Zarif noted that Tehran and Moscow face common challenges, and said, “The most important challenge is the regional challenges and Iran and Russia have been able to help the Syrian people and drive out the terrorists.”

He described the field situation in Syria as “highly good”.

Iran and Russia are providing Syria with military advisory and humanitarian aid in its fight against terrorist groups.