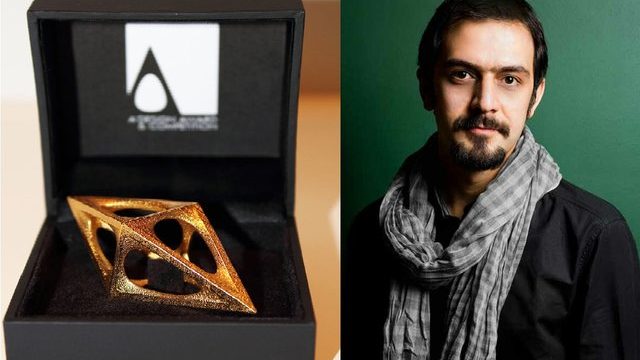 IFP – An Iranian artist has rejected a prestigious Italian award in protest against the humiliating behaviour of the Italian embassy in issuing visa for Iranian applicants.

Touraj Saberivand, an internationally renowned graphic designer, had been invited to receive the A Design Award for one of his artworks, but he returned it after failing to receive his visa on time from the Italian embassy to take part in a ceremonial event in Italy.

In a letter of criticism to the Italian cultural attaché in Iran, Saberivand said he has changed his mind about travelling to Italy.

Saberivand has already received some prestigious international prizes including Graphis from the US, A Design from Italy, International Design Award, and Silver Cedar from Iran.

According to a copy of the letter retrieved by ISNA, Sabervan said, “Back in April, I was invited to receive A Design Award in Italy. But when I referred to the Italian embassy, I was faced with their disrespectful behaviour. So, I decided to cancel my travel to Italy.”

He went on saying the organizers of the competition in Italy “have sent me the award by post, so I return it to you in protest at your behaviour.”

A Design is one of the leading and most prestigious competitions in graphics across the world which is held annually in Italy.

Earlier, in a piece published by the Shargh daily newspaper in Iran, Saberivand said, “When you refer to the Italian embassy in Tehran, you are faced with a written announcement on the wall saying that for taking an interview appointment, you need to refer to our website. But when you go to their website, you will find that there is no chance to take any time.”

He went on saying that many believe this is the dealers working with the Italian embassy who manage the embassy’s time in return for money. This comes as the embassy says any appointment taken by the dealers would be cancelled,” he added.

Saberivand blamed the management of the embassy for such “disrespectful and illegal behaviour,” saying such behaviours are far from diplomatic principles and stand in stark contradiction with the humanitarian principles boasted by the European Union.

Meanwhile, another Iranian sculptor, Jamshid Moradian, who was recently expected to travel to Europe to take part in an art festival, also expressed his dissatisfaction with the French embassy’s delay in issuing visa for him. He also criticized the embassy’s officials for the black market created for taking appointment from the embassy.