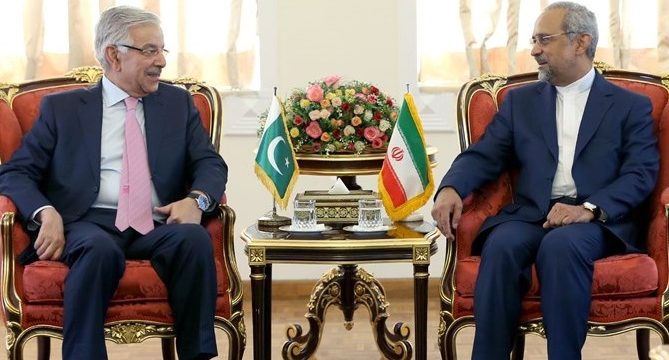 MNA – Iran’s VP for Economic Affairs Mohammad Nahavandian has called for boosting trade transactions with Pakistan to reach the goal of 5 billion euros.

During a meeting with Pakistani Foreign Minister Khawaja Muhammad Asif on Monday in Tehran, Iranian Vice-President for Economic Affairs called for expediting trade negotiations between the two countries and removing obstacles to banking transactions, adding “although the level of trade cooperation between the two countries shows a 35 percent increase, we need to boost economic transactions to reach five billion euros in the post-sanctions era.”

The implementation of a two-way credit line of €500 million between the two countries’ central banks and the opening of bank branches should be realized in the next three months, he stressed.

Nahavandian went on to add that the establishment of passenger and cargo shipping lines between Iran’s Chabahar and Pakistan’s Karachi, as well as a direct flight between the two countries could lay the groundwork for long-term cooperation.

The Pakistani FM, for his part, called for expediting preferential and free trade talks, saying gas and electricity cooperation between Iran and Pakistan would benefit the two sides as well as the region.

Iran-Pakistan-China trilateral cooperation on investment in transport and energy will speed up, he promised.