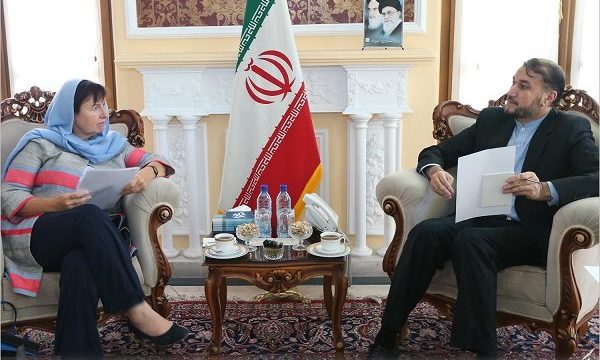 He made the remarks at a meeting with Dutch Ambassador to Iran Susana Trestal on Tuesday morning in Tehran.

Early into the session, Amir-Abdollahian voiced satisfaction towards growing cooperation between Tehran and Amsterdam saying “dialogue and talk between parliamentary officials of the two countries could significantly enhance and expedite bilateral cooperation between the two sides.”

In the same line, he stated that Iran’s government would welcome exchange of parliamentary delegations.

The official, while pointing to recent developments in Myanmar and Rohingya Muslims’ genocide in the Southeast Asian country, condemned silence and indifference of the international community in the face of extremist crimes adding “we expect the European Union (EU) and the Netherlands to take appropriate stances and exercise efforts to prevent continuation of the ongoing humanitarian crisis in Myanmar.”

At another part of his remarks, Amir-Abdollahian touched upon field and political developments in Syria asserting “in view of recent victories obtained by the Syrian army over terrorists, the Arab country is gradually taking steps towards further peace.”

Parliament’s general director for international affairs, while referring to the slow rate of field developments in Syria which has paved the path for realizing political initiatives, explained that presence of terrorists in peace talks can hinder the process.

Dutch Ambassador to Iran Susana Trestal, for her part, underline the significance of boosting parliamentary ties between Iran and the Netherlands stating “strengthening these relations will help promote mutual understanding and familiarity of members of the two parliaments.”

On developments in Myanmar, she expressed regret towards the ongoing crises in the Southeast Asian country explaining that “recent incidents have been reflected in the Dutch media and due attention has been paid to brutal crimes.”

At the end of her remarks, the official said political solution remained as the only way out of the Syrian crisis and although the process has faced numerous ups and downs over recent years, the general trend can be evaluated as positive.