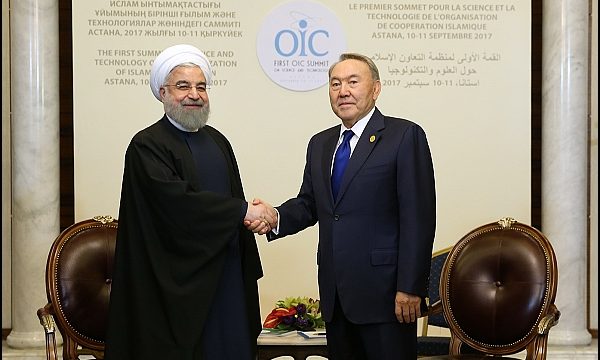 MNA– The presidents of Iran and Kazakhstan stressed the importance of developing all-out relations between Tehran and Astana, especially in the areas of economy, transit and energy.

President Rouhani put emphasis on Kazakhstan’s role in the region and the Organization of Islamic Cooperation. According to Rouhani, Tehran and Astana have always constructive cooperation on their mutual interests and international issues.

President Nazarbayez expressed his gratitude for the presence of President Rouhani in this Summit and said “your second time election as president is proof of people’s trust in you and a reassurance for us to continue our positive relations.”

Pointing out that Kazakhstan has always stood beside Iran, Nazarbayev specified that the country has made considerable efforts regarding the nuclear deal and has made significant progress despite the anti-Iran sanctions.