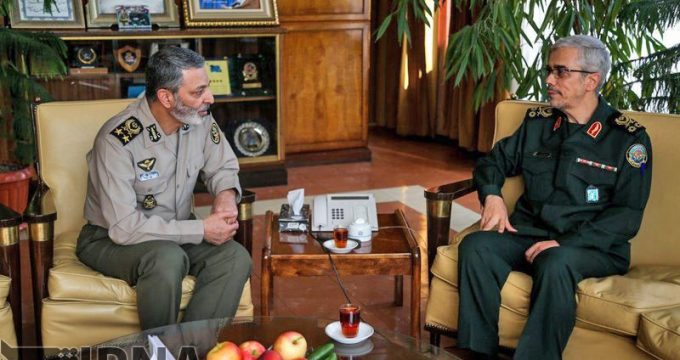 IRNA – Chief of Staff of the Armed Forces Major General Mohammad Hossein Baqeri lauded the country’s armed forces, the army in particular, for their pace of progress in upholding Iran’s defense shield.

Major General Baqeri made the remarks in a meeting with Chief Commander of Iran’s Army Major General Abdolrahim Mousavi in Tehran on Thursday.

‘God willingly the Islamic Republic of Iran’s Armed Forces, especially the army, are swiftly paving the path of progress under the command of Supreme Leader and Commander-in-Chief (Ayatollah Seyyed Ali Khamenei) in land, sea and aerospace,’ he added.

On Aug 26, Major General Baqeri said Iran’s army is playing a role of deterrence against enemies’ threats and global arrogance.

‘Today our country is passing through a sensitive and vital period and the army plays the role of deterrence against the enemies’ threats and global arrogance,’ he added.

‘The enemies should come to the conclusion that the cost of an aggression on Iran is much higher than its benefits for them,’ Baqeri said.

The enemy has found decisively that any military aggression on Iran would lead to their humiliating defeat, and that’s why they are turning to proxy wars, the General added, promising that Iran is facing a bright future as a result of the armed forces’ efforts.

‘Iran has been able to reach a satisfactory level of deterrence in the face of direct military threats by the enemies,’ he said.