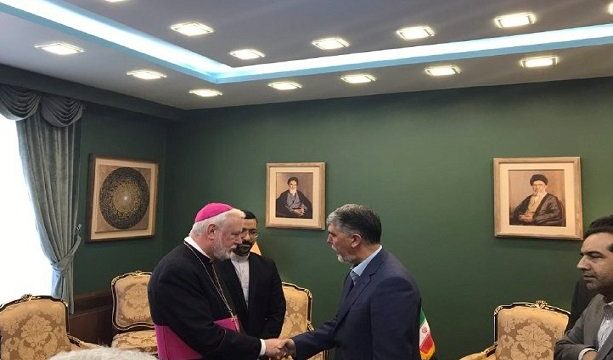 During the meeting held on Wednesday in Tehran, Salehi stressed that Vatican shares similar views with Iran on various issues including peace and security in the Middle East, paying notable attention to family as the oldest social institution, as well as opposing the religious and ethnic extremism.

Salehi went on to highlight the peaceful coexistence between the Muslim and Christian communities in Iran, adding “there are about 40 churches in Tehran, and many Christian-run cultural, sports, and artistic associations, as well as various media outlets which allow Iranian Christians to freely carry out their religious and social activities.”

Archbishop Gallagher, for his part, maintained that his visit to Tehran was in response to visit of President Rouhani and Foreign Minister Mohammad Javad Zarif to Vatican two years ago.

“The aim of my visit is to improve diplomatic ties between Iran and Vatican, as well as to facilitate Church affairs and Catholic customs in Iran,” he said.

“The Catholic community in Iran has an important role and is fully respected. I am glad to see Iranian Christians enjoy equal judicial freedoms here,” he added.