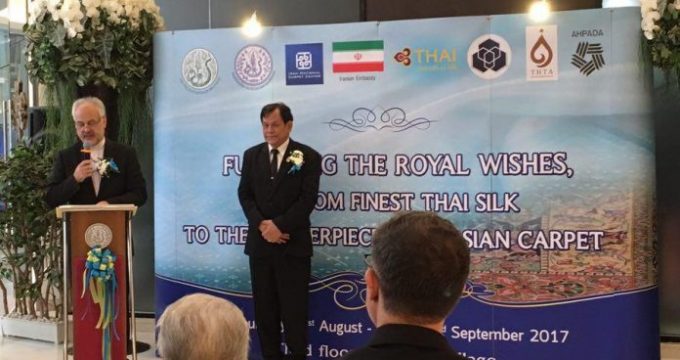 IFP – The Thai capital of Bangkok is hosting an exhibition of Iranian handmade carpets titled “From the Finest Thai Silk to the Masterpiece of Persian Carpet.”

Organized by a Thai woman interested in Iranian culture and art, the four-day exhibition will close on Sunday (September 3).

According to a Farsi report by IRNA, the opening ceremony of the exhibition was attended by a number of officials from the Ministry of Foreign Affairs of the Kingdom of Thailand and the Thai Ministry of Agriculture and Cooperatives, the Iranian ambassador to Bangkok, and foreign diplomats residing in the Thai capital.

Representatives of some international organizations based in the Thai capital and a number of Iranians interested in Persian art and culture living in the city or coming from other countries also attended the ceremony.

Speaking at the opening ceremony, Iranian Ambassador to Bangkok Mohsen Mohammadi hailed the cultural commonalities between Iranian and Thai nations, saying holding such exhibitions plays a very useful and valuable role in establishing closer connection between the two sides.

A pictorial carpet featuring a portrait of Thailand’s late King Bhumibol Adulyadej woven by artists from the northwestern Iranian city of Tabriz in East Azarbaijan Province was also unveiled during the exposition.

The gift was received very well by the Thai officials and participants of the exhibition.