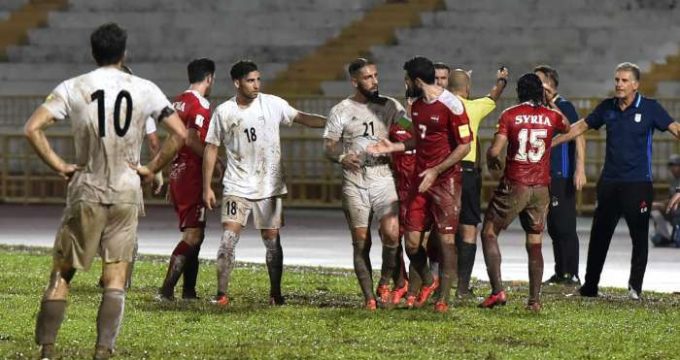 IFP – A German news website has ruled out the possibility of a match-fixing conspiracy by Iran and Syria in their last Group A fixture in Asia’s third qualifying round for the 2018 FIFA World Cup Russia, which is to be held in Tehran on Tuesday (September 5).

Ahead of the Tuesday’s FIFA World Cup Asian qualifier in Group A between Iran and Syria, rumours of a game-fixing plot by the two teams are rife.

According to a Farsi report by the Jame Jam Online news website, close political relations between Iran and Syria and the fact that they are both Muslim states have fueled such rumours.

With 21 points from their previous nine matches, Iran sits on top of Group A’s table and have already qualified for the next year’s extravaganza in Russia.

Syria, on the other hand, have notched up 12 points from their earlier fixtures and only needs a win at Azadi Stadium in the Iranian capital of Tehran to keep alive their hopes of guaranteeing at least a play-off berth or, if luckier, securing a place at the next year’s World Cup.

Syria sits two points behind the second-placed Korea Republic and above the fourth-placed Uzbekistan on goal difference. The Koreans and the Uzbeks will be facing off in Tashkent in a simultaneous kick-off. This means that a win could even see Syrians claim second spot and a historic first-ever FIFA World Cup appearance.

A couple of days before the match between Iran and Syria, Germany’s shz.de news website has dismissed the likelihood that the match is going to be a fixed game, writing that despite the rumours of a probable match fixing conspiracy by the two squads, Iran’s head coach Carlos Queiroz has categorically denied such gossips, promising that his side will take on Syria with all their might and at full capacity.

In addition, after a goalless draw in the first leg of the match between the two teams in Malaysia in November 2016, Iran is highly motivated to defeat Syria in Tehran.

Meanwhile, the Iranian squad has not conceded even a single goal in their previous nine matches, setting a great world record. This is another factor guaranteeing that they have high motivation for bettering their record by putting in a convincing performance in Tehran.