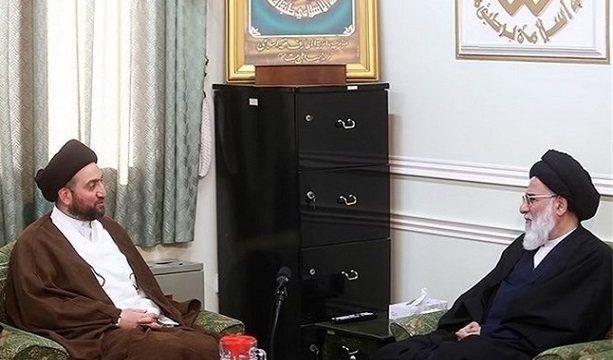 Visiting Ayatollah Hashemi Shahrudi made the remark in a meeting with the Head of the National Iraqi Alliance Ammar Hakim on Sunday, adding, “the fight against ISIL has strengthened religious belief and drawn attention to religious matters in the hearts and minds of people. Iraq is a powerful country; we are grateful of the sacrifices made by Iraqi people and it shouldn’t be allowed that political issues and potential conflicts between the politicians to have a negative impact on the fighting spirit of the people.”

Ayatollah Hashemi Shahrudi went on to add, “victory in the war against ISIL is a god-given blessing as were the Popular Mobilization Forces and the religious decrees issued by shia theologians.”

During this meeting which took place in the presence of Secretary of Iran’s Expediency Council Mohsen Rezaee, Ayatollah Shahroudi maintained that the situation of today’s Iraq is similar to that of Iran after the Imposed War of 1980; because the security of the country is improving, they must move forward through serving people, strategic planning and national unity.

Stressing improvements in the security of Iraq, Ayatollah Shahroudi went on to say that domestic war is no longer a threat to Iraq and internal security will further strengthen.

“Victory of Iraqi people shows that terrorism in this country will be soon eradicated, therefore the people of Iraq must focus on rebuilding their country,” he added.

Ammar Hakim, for his part, voiced hope that the Iraqi nation would retake its position in the Muslin world by moving past the two threats of terrorism and foreign intervention.