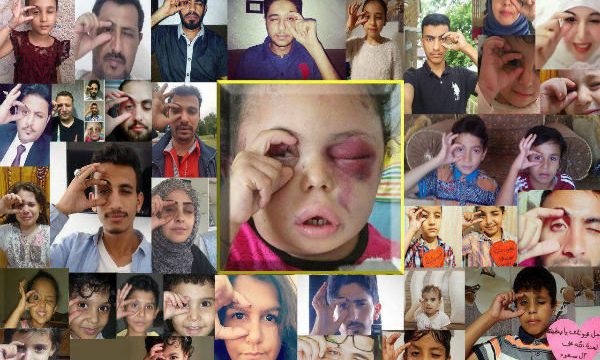 IFP- Photo of a one-eyed Yemeni girl, the lone survivor of a recent brutal airstrike by Saudi Arabia, has gone viral, setting off a wave of solidarity on social media networks.

Users around the world started sharing photos of themselves with one eye closed in solidarity with Bouthaina al-Rimi, after footage showed the badly bruised and injured little girl trying to open one of her swollen eyes with her fingers.

The young girl, believed to be four or five, was orphaned after her parents and five siblings as well as her uncle were killed in a Saudi airstrike that destroyed their apartment building in the Yemeni capital Sana’a on Friday. Little Bouthaina suffered severe fractures in her face.

Overall, 14 people were killed and another 16 were injured in the attack, one of them as young as three years old, according to a report by the International Committee of the Red Cross (ICRC).

The picture has helped raise awareness about the brutal Saudi military aggression against the impoverished Yemen. The unprovoked war has so far killed over 12,000 Yemenis and put the country on the verge of a humanitarian crisis.

Bouthaina’s image has also brought attention to the plight of some 500,000 Yemeni children suffering from acute malnutrition. The deadly war has also led to a cholera outbreak infecting more than half a million Yemenis.

The hashtags #Bouthaina_The_Eye_Of_Humanity and #I_SPEAK_FOR_BUTHINA had both been used more than 3,000 times since Wednesday, according to BBC.

“Such loss of civilian life is outrageous and runs counter to the basic tenets of the law of armed conflict,” Carlos Morazzani, the deputy head of ICRC’s delegation in Yemen, said in a statement.

Saudis took responsibility for the attack on Saturday, citing a “technical mistake.”