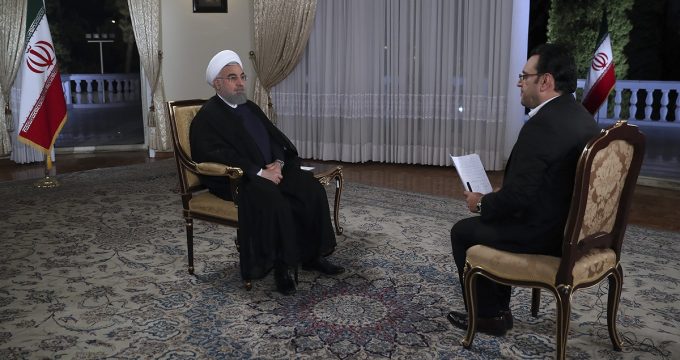 IAEA will not give in to US demands over inspection of Iran’s military sites: Rouhani

Press TV – President Hassan Rouhani has said that Iran can never be bullied into permitting the inspection of its military sites.

Rouhani, who made the remarks during a live broadcast on Tuesday night, noted that Washington’s demands from the International Atomic Energy Agency (IAEA) over the inspection of Iran’s military sites would probably not be accepted by the UN body.

“The International Atomic Energy Agency is very unlikely to agree to the US’s demands over inspecting our military sites,” he stressed.

The Iranian president referred to the Friday statements by US Ambassador to the UN Nikki Haley who urged the IAEA to request access to Iranian military sites, in what is regarded as an attempt by the US to undermine the Joint Comprehensive Plan of Action (JCPOA).

The deal was reached between Iran and the P5+1 countries — namely the US, Russia, China, France, Britain, and Germany — in July 2015 and took effect in January 2016.

US President Donald Trump has called the JCPOA — which was negotiated under his predecessor, Barack Obama — “the worst deal ever” and repeatedly threatened to tear it up.

Rouhani further stressed that regulations determine the framework of Iran’s relation with the IAEA not Washington and its pressure.

He also noted that EU countries continue to support the JCPOA despite pressure from their ally, the US.

“As you know, the EU’s stance on the JCPOA is clear; all 28 countries in the bloc have announced that they are committed to the nuclear agreement,” he added.

Reiterating that Iran will not be the first party to violate the deal, Rouhani noted that violations by other parties will be responded to in kind.

On the topic of relations with Saudi Arabia, Rouhani noted that Tehran and Riyadh must solve their disputes via talks.

The president added that Iran has always called for establishing friendly ties with its neighboring countries and has good ties with almost all of them.