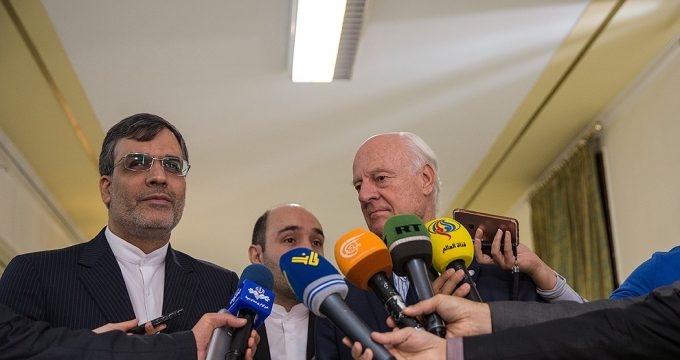 Next round of Astana talks on Syria to be held in mid-September: Iranian Deputy FM

Tasnim – Iranian Deputy Foreign Minister for Arab and African Affairs Hossein Jaberi Ansari said the next round of Syria peace talks in Kazakhstan’s capital city of Astana would be held in mid-September.

Consultations for holding the sixth round of Astana talks on the settlement of the Syrian crisis in mid-September are underway, Jaberi Ansari said on Monday following a meeting with United Nations Special Envoy for Syria Staffan de Mistura in Tehran.

He added that the exact date of the talks would be set after negotiations between representatives of Iran, Russia and Turkey.

Astana has hosted five rounds of peace talks for Syria since January. Russia, Iran, and Turkey serve as guarantor states in the peace process. The negotiations are aimed at bringing an end to the foreign-backed militancy in Syria, which began in March 2011.

The Astana talks have so far resulted in an agreement on four de-escalation zones across Syria.

They have been held in tandem with another series of talks hosted by Geneva and brokered by the UN.

When the first round of the Astana talks was organized, the Geneva talks had been stalled for months. The talks in the Kazakh capital then provided momentum for the UN-brokered negotiations, helping revive them.