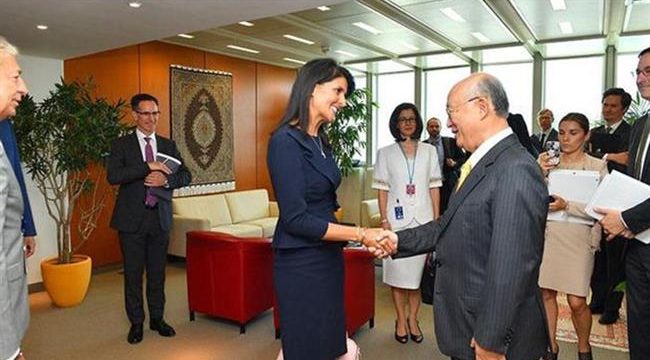 Iran criticizes IAEA for holding talks with US envoy about JCPOA

Press TV – US Ambassador to the United Nations Nikki Haley has held talks with the head of the International Atomic Energy Agency (IAEA) over Iran’s nuclear deal, a move Tehran says is aimed at manipulating the agency against the agreement.

During the talks in Vienna on Wednesday, Hailey and IAEA chief Yukiya Amano “discussed US concerns about ensuring Iran strictly adheres to its obligations.”

She also “praised the IAEA’s technical expertise and its credibility, professionalism and seriousness in conducting its monitoring and verification work in Iran,” adding that “IAEA reports (about Iran’s adherence to the accord) can only be as good as the access Iran grants to any facility the IAEA suspects of having a nuclear role,” read parts of a communique released by Haley’s office after the meeting.

A few hours after the meeting, Iranian Foreign Minister Mohammad Javad Zarif criticized Haley’s trip and described it as an attempt to press and manipulate the IAEA.

Zarif noted that the move is aimed at destroying the nuclear deal by raising doubts about the agreement’s stability and sustainability, stating that Haley’s trip violates the deal’s mandate for confidentiality.

The IAEA did not make any comments after Wednesday’s meeting.

Arms Control Association analyst Kelsey Davenport told AFP, “The Trump administration needs a wake-up call on the costs of sabotaging the nuclear deal with Iran.” “Hopefully visiting the IAEA will allay concerns about monitoring the agreement and demonstrate to Haley that the deal put Iran’s nuclear program under a microscope and keeping it there is the best way to guard against any illicit nuclear activity,” she said.

The IAEA monitors the technical aspects of the deal — officially titled the Joint Comprehensive Plan of Action (JCPOA) — and regularly reports Iranian compliance. It has consistently confirmed Iran’s compliance with its end of the bargain in several reports so far.

The nuclear deal, which was reached between Iran and world powers in 2015, put limits on Iran’s nuclear activities in exchange for, among other things, the removal of all nuclear-related bans against the Islamic Republic.

The administration of US President Donald Trump has been skeptical of the deal, however, and while it has twice certified Iranian commitment in notifications to the US Congress, it has reportedly been seeking ways to potentially avoid future certification. The agreement is being reviewed by the US State Department every 90 days to declare whether Tehran was abiding by it.

The US has also said that it is conducting a review of the deal to see whether continued sanctions relief — a US commitment under the agreement — is in the US’s national interest. This is while the IAEA has time and again reported that Iran has been abiding by the terms of the nuclear deal.