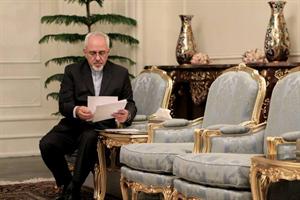 Tasnim – The Iranian foreign minister cautioned International Atomic Energy Agency (IAEA) Director-General Yukiya Amano against “detrimental consequences” of forthcoming talks by the US ambassador to the UN on the nuclear deal between Tehran and world powers, known as JCPOA.

In a letter to Amano, Mohammad Javad Zarif complained that a Wednesday trip to the Austrian capital of Vienna by the US ambassador to the UN, Nikki Haley, was intended to sow doubt about the Joint Comprehensive Plan of Action (JCPOA).

“Even before the visit takes place, the way it is planned and publicized and the signal that it sends have notable detrimental consequences for the successful implementation of the JCPOA,” Zarif wrote in the letter, according to the Washington Post.

Haley dismissed the Iranian top diplomat’s implication that she is searching for ammunition.

“I find it interesting that Iran is so worried about me going to Vienna,” she said. “If they don’t have anything to hide, they shouldn’t be concerned about me asking questions of the IAEA.”

The accord took effect in January 2016 and was supposed to terminate all nuclear-related sanctions against Iran all at once, but its implementation has been hampered mainly due to US policies.