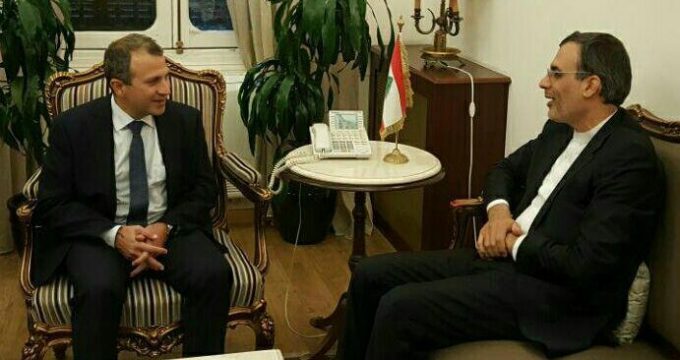 In the talks, Jaberi Ansari briefed Bassil on Tehran’s efforts to further boost interaction with its partners in the Astana talks aimed at resolving the Syria crisis. He said Lebanon and other regional countries’ help is needed to settle the Syria conflict.

He expressed hope that through cooperation between Iranian and Lebanese foreign ministries, a planned trip to Tehran by Lebanese President Michel Aoun will be arranged in such a way that his meetings would usher in a new era of closer cooperation between the two sides in all fronts, especially political and economic arenas.

The Lebanese foreign minister, in turn, thanked Tehran for supporting Beirut in its fight against terror.

“The establishment of a ceasefire and creation of de-escalation zones in Syria within the framework of the Astana talks will help Lebanon tackle terrorism and relieves the country from the dire consequences of the Syria crisis,” he said.

The two sides also highlighted the need to deepen and enhance mutual relations and continue consultations on bilateral and regional issues.