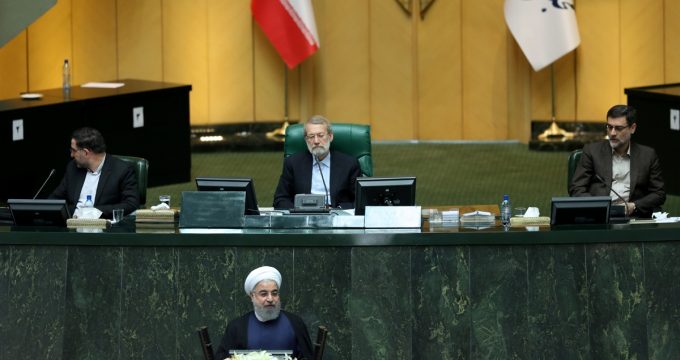 IRNA – In a speech delivered to defend his proposed cabinet, President Hassan Rouhani said in Majlis (Iran’s Parliament) that the only existing way to progress is ‘security, freedom, and peace’, which is to be pursued by the new government.

‘The door to progress was locked by sanctions, which is now unlocked,’ President Rouhani said, adding that to compete with the world, and even to use the oil, Iran needs etter technology and investment.

He went on to say that no country can make progress in isolation and now that the Joint Comprehensive Plan of Action (JCPOA) has unlocked the doors, the main duty of the foreign ministry is to safeguard the deal against the US, the Zionists, and some small regional countries.

Regarding security and freedom, he said, ‘We cannnot sacrifice freedom for the sake of security or sacrifice security for freedom, we should enjoy both.’

President Rouhani also said that security doesn’t depend only on weapons, but on social trust and presence.

‘However, we need guns, too. We are seeking those, and we will continue to do so,’ he added.progress

Today, Majlis finished voting on Rouhani’s proposed second cabinet. After five days of marathon parliamentary debates, sixteen ministerial nominees out of 17 were successful in getting the confidence votes of Iranian lawmakers on Sunday.

All ministerial nominees except the nominee for minister of energy Habibollah Bitaraf received vote of confidence.

President Rouhani hasn’t still proposed his choice for the post of ministry of Science, research and technology.

President Hassan Rouhani was re-elected as president for a second term after winning a landmark victory on May 19.

President Rouhani took office on August 5. Then, he proposed 17 out of 18 nominees for ministerial posts of his cabinet.