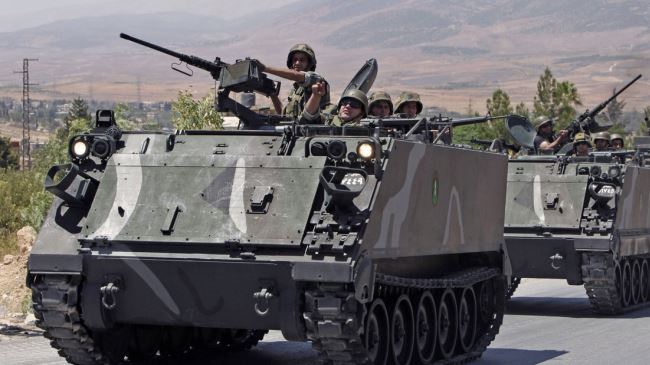 Press TV- Lebanese army troops have been attacking positions held Daesh terrorists near the Syrian border for a second day after liberating a third of the militant-held territory.

On Sunday, Lebanon’s National News Agency (NNA) reported that the army forces were firing heavy artillery and rockets at the Daesh positions in the northeastern village of Ras Baalbek.

The Lebanese military launched its anti-terror operation on Saturday. The Hezbollah resistance movement also started a simultaneous offensive against Daesh from the Syrian side of the frontier.

The Lebanese military has launched an offensive against Daesh terrorists in eastern Lebanese territory along the border with Syria.

Colonel Nazih Jreij, a spokesman for the Lebanese army, expressed his satisfaction with the first day of the campaign, saying, “We achieved our goals on the first day, and even a bit more.”

“The terrorists are currently being humiliated,” he said, adding, “The military operation will continue until the targets are met, the terrorists are expelled and soldiers are deployed along the borders.”

Jreij also noted that around 30 square kilometers of territory, approximately a third of the area in the hands of the militants, had been recaptured from the Takfiri elements.

During the first day of the military operation, 10 Lebanese soldiers sustained injuries in clashes and 20 militants were killed in either direct combat, shelling or aerial strikes, he pointed out.

Additionally, Bachir Matar, the head of the municipality of the town of al-Qaa, hailed Lebanon’s long-awaited military campaign, saying, “We consider it pivotal, the Lebanese army is liberating our land of Lebanon and Qaa.”

Meanwhile, Hezbollah’s media bureau reported that its fighters and the Syrian army had on Saturday “managed to liberate 87 square kilometers of the total area controlled by the Daesh … in western Qalamoun region.”

Before Saturday’s advances, Lebanon’s military estimated that some 600 Daesh terrorists were present in Ras Baalbek and al-Qaa, controlling around 120 square kilometers of territory.

The fresh battles against Daesh come at a time that the terror outfit has retreated from much of the areas under its control in both Syria and Iraq.

The militants of the al-Nusra Front group, recently renaming itself Fateh al-Sham, withdrew from Arsal following a series of consecutive defeats that forced them to agree to a ceasefire deal.

The agreement saw around 8,000 militants and refugees transported to a Daesh-held Syrian region in return for the release of five captured Hezbollah fighters.