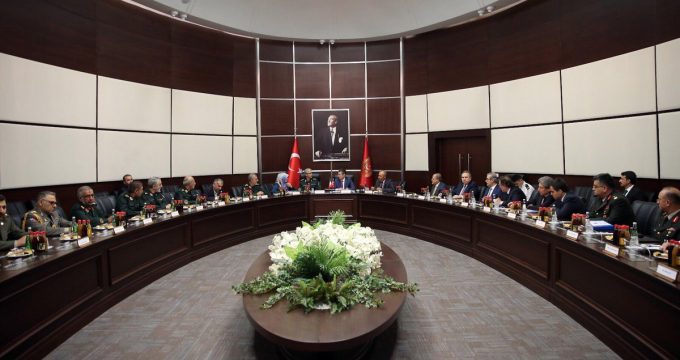 In the Middle East, longtime rivals try a temporary alliance

Worldview.Stratfor– Politics and war make for strange bedfellows, as Iran and Turkey can attest. The two countries, historically rivals, are laying aside some of their differences to focus on common priorities: managing the Syrian civil war and slowing the Kurds’ progress toward greater autonomy. A delegation of Iranian military and foreign service officials, including Islamic Revolutionary Guard Corps Gen. Mohammad Hossein Bagheri, visited Turkey this week to discuss these issues. The meeting, the first of its kind for Iran and Turkey since 1979, shed light on the opportunities for cooperation between the two regional powers. Nevertheless, their shared interests will take them only so far. Diverging views of how to manage instability in the Middle East are bound to create more conflict than concord between Iran and Turkey in the long run.

The conflict in Syria is a top priority for Iran and Turkey alike. And conditions may be right for the two to reach an understanding on northern Syria that would address their main concerns in the war-torn country. Ankara is interested primarily in reducing the Kurds’ territorial holdings along its border with Syria, while Tehran and the loyalist forces it supports want to focus on defeating the rebels in Idlib province. By working together, Iran and Turkey could achieve their goals. Their cooperation, however, could further degrade their already strained relations with the United States along the way. After all, Russia — Washington’s primary competitor for influence in the Middle East and beyond — is involved in Iran and Turkey’s discussions over Syria, too. The Russian foreign minister will visit Turkey soon to go over the operations in Idlib.

Whatever the United States’ opinion of the arrangement, though, the prospective alliance between Turkey and Iran in Syria won’t last long. Ankara and Tehran have long been on conflicting sides of the Syrian civil war. Turkish President Recep Tayyip Erdogan is holding fast in his opposition to Syrian President Bashar al Assad’s government, while Iran still stands firmly behind it. Furthermore, Turkey will not take kindly to Iran’s growing influence just across its border in the years ahead, no matter what temporary deals it sees fit to strike with its longtime rival in the short term. In Iraq, meanwhile, the situation is more precarious: The impending offensive in Tal Afar stands to heighten tensions and perhaps cause clashes between Turkish-backed and Iranian-backed forces.

On the issue of Kurdish autonomy, likewise, Turkey and Iran’s overlapping interests have brought them into a rare alignment. Ankara and Tehran want to stop the upcoming referendum vote on Iraqi Kurdistan’s independence (though each side also benefits from its relationship with factions in the Kurdistan Regional Government). For Iran and Turkey alike, the referendum threatens to upset regional stability — tenuous as it is — and to foment unrest among their own Kurdish populations. Tehran, moreover, worries about what Iraqi Kurdistan’s independence would mean for Baghdad’s economic and political future. With these concerns in mind, Turkey and Iran could try to coordinate to halt the referendum. In the meantime, they are working together to build a wall along their shared border to prevent Kurdish militants from crossing between them.

Yet neither side will be willing to sacrifice its interests in Iraqi Kurdistan to help the other keep its Kurdish population in check. Iran prizes its political and economic connections with the Patriotic Union of Kurdistan party just as Turkey values its ties to the Kurdistan Democratic Party. If Ankara and Tehran join forces against the referendum, they will be careful to draw the line in their collaboration short of disrupting their relationships with their Kurdish allies.

Though far from fast friends, Turkey and Iran have demonstrated a pragmatic willingness to work together on issues of mutual interest over the years. Their historic meeting this week highlighted two more areas in which collaboration could prove beneficial for Ankara and Tehran alike. (And as Saudi Arabia increases its involvement in the region to counter their interests, the two can add a deep wariness of the kingdom to their list of things in common.)