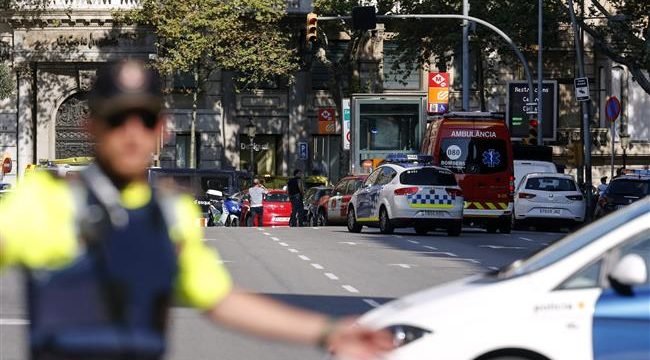 Press TV- Police in Spain have launched a massive search operation to find an assailant who killed at least 13 people by ramming a van into a crowd in central Barcelona, and have thwarted at least two other attacks, including a bombing plot.

The deadly van incident happened along Las Ramblas, a street in central Barcelona popular with tourists and locals alike, on Thursday afternoon, when it was packed with tourists taking an afternoon walk.

PressTV-13 dead after van plows into crowd in Barcelona

A van plows into dozens of people in the center of the Spanish city of Barcelona, killing over a dozen people and injuring many.

More than 100 people were injured, and authorities have said the death toll could rise.

Foreign nationals were among the dead.

The driver was seen escaping on foot, and security forces are involved in a large-scale operation to find him.

The Takfiri Daesh terrorist group has claimed responsibility for the attack.

Police have already arrested two men — a Spanish from Spain’s North African enclave of Melilla, and a Moroccan — in connection with the van attack but neither was the driver.

The men were arrested in the towns of Ripoll and Alcanar, both in the region of Catalonia, of which Barcelona is the capital.

Driss Oukabir, a 28-year-old of Moroccan origin, was suspected of having rented the van used in the assault. Spanish reports later said he had handed himself in to police after reporting his documents had been stolen, possibly by his brother.

Another car ramming in Barcelona

Police said they also shot dead on Thursday a man who had driven a car into a police checkpoint in Barcelona, though they had no evidence that he had been connected with the van attack.

Meanwhile, in the early hours of Friday morning, in the town of Cambrils, 100 kilometers away from Barcelona, seven people were injured when “alleged terrorists” drove into pedestrians before being shot dead by security forces.

Two of the pedestrians injured in the attack were said to be in critical condition.

“The alleged terrorists were in an Audi A3 and apparently knocked down several people before coming across a police patrol and a shoot-out ensued,” said a spokesman for the regional government of Catalonia, where Cambrils is located, in Spain’s northeast.

The five attackers, who were wearing explosive vests, were then shot dead, police said. The bomb vests were detonated by the force’s bomb squad.

Police said the situation in Cambrils was now under control.

Separately, two explosions occurred at a house in the town of Alcanar, 130 km south of Barcelona, in the early hours of Thursday.

Police said the residents had been preparing explosives when the blasts took place.

At least one person died and more than 16 were injured in what was initially thought to be a gas explosion.

A string of Daesh attacks similarly carried out by plowing a car into crowds in European cities in the past months has killed well over 100 people — in Nice, Berlin, London, and Stockholm.

The Barcelona attack was the deadliest attack in Spain since March 2004, when Takfiri militants placed bombs on commuter trains in Madrid, killing 191 people and wounding more than 1,800.