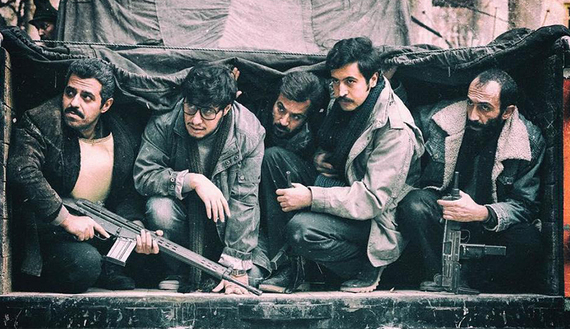 Al-Monitor | Zahra Alipour: “This film is based on a true story. However, for security reasons, certain characters’ names have been changed.” The Iranian film “Midday Adventures,” directed by Mohammad Hossein Mahdavian, begins in Tehran on June 19, 1981, 26 months after the Islamic Revolution and nine months after the outbreak of the Iran-Iraq War. Narrating real events, the opening scenes show a busy street in the Iranian capital, with people chanting political slogans, some in support of the Islamic Republic and others in opposition. Amid the crowd, a woman climbs atop a vehicle to read out a political statement; then, suddenly, an angry man drags her down. Pandemonium breaks out. People set a vehicle on fire and continue to chant angry slogans.

A man who is later revealed to be an intelligence agent working for the nascent revolutionary government is seen taking pictures of the crowd. The story of “Midday Adventures” is the official narrative of an era in the history of the Islamic Republic that authorities still view as highly sensitive, blurry and violent. The film narrates events up until Feb. 8, 1982, portraying the violence perpetrated by members of the Mujahedeen-e-Khalq (MEK), including bombings and assassinations, and intelligence agents’ efforts to identify and arrest the leaders of the group.

In the years leading up to the 1979 Islamic Revolution, the MEK was the largest religious organization that espoused armed resistance against the shah’s regime. Upon the victory of the revolution in early 1979, it issued a message congratulating “the leader [Ayatollah Ruhollah Khomeini] and the people of Iran.” However, in the ensuing months and years, serious political and ideological disagreements emerged between the MEK and the rulers of the Islamic Republic.