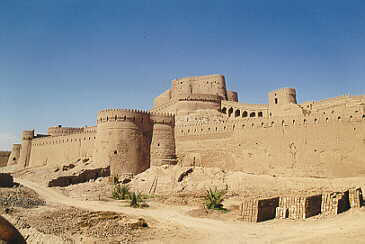 Financial Tribune- Restoration of Bam Citadel will be complete in two years, the head of the provincial office of Iran’s Cultural Heritage, Handicrafts and Tourism Organization said.

“About 70% of the site will be restored, since regulations require us to ensure the impact of the earthquake remains visible,” Mahmoud Vafaei was also quoted as saying by local news website Kerman Online.

The restoration plan is not aimed at renovating the site the way it was before the quake, as UNESCO does not allow countries to completely eliminate the impact of natural calamities, arguing that they are part of history.

Located in Bam, Kerman Province, Bam Citadel was once the largest adobe building in the world but was almost entirely razed to the ground by a 6.6-magnitude earthquake on December 26, 2003, which killed around 32,000 people.

Inscribed on the World Heritage List in 2004, Bam Citadel is one of Iran’s 22 world heritage sites.

The UN body removed Bam Citadel from its list of World Heritage in Danger in 2013, following the improvement in the site’s management, conservation and progress in restoration.

The origin of this enormous structure on the historical Silk Road can be traced back to the Achaemenid period (6th to 4th centuries BC). The heyday of the citadel was from the 7th to 11th centuries, being at the crossroads of important trade routes and known for the production of silk and cotton garments.