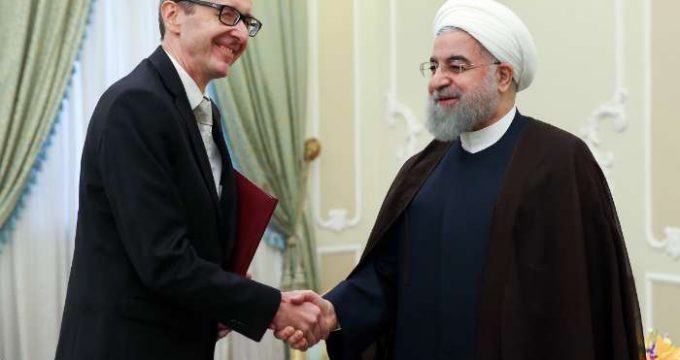 president.ir- President Rouhani met with the new Ambassador of Austria to Tehran and described Tehran-Vienna relations old and very friendly, saying: “The two Iranian and Austrian nations have never had any conflicts of interests”.

In the meeting that was held on Wednesday in Tehran, Dr Rouhani received Ambassador Stefan Scholz’s letter of credence and said: “Tehran welcomes deepening ties with the European Union member countries, including Austria”.

“The two countries have ample potentials in various fields, especially investment, business, science and modern technologies and they can take advantage of these potentials to further deepen ties to serve the two nations’ interests,” Rouhani continued.

He added: “In the post-JCPOA era, better and more opportunities for more relations have been provided to further deepen ties with all European countries and these opportunities must be used”.

Referring to Austria’s successful hosting of the nuclear agreement, he said: “The Joint Comprehensive Plan of Action (JCPOA) is one of the agreements reached in Vienna and it will be to no country’s detriment and all parties will enjoy it”.

Dr Rouhani also appreciated Austria’s constructive approach to deepening of ties and said: “The JCPOA was a win-win agreement that on the one hand, it dismissed unreal concerns of some western countries and, on the other hand, it eliminated unjust sanctions against the Iranian nation”.

“Today, because of this agreement, a good, peaceful economic atmosphere has been created that benefits the two sides and we are determined to use this new atmosphere to attract investment, transfer modern technologies and facilitate economic cooperation, especially in banking transactions,” the President said.

Dr Rouhani also said: “Full implementation of the JCPOA agreement is beneficial to the European Union and the region; therefore, it is essential that the EU increase its efforts and role in this field”.

At the same meeting, the new Ambassador of Austria to Tehran, Stefan Scholz’s, also presented his letter of credence and said: “The Islamic Republic of Iran can always count on Austria, especially in hard times, as a trustworthy partner”.

“Austria is determined establish multilateral cooperation with Iran in developing regional and international security,” he said, adding that Austria supports Iran’s international goals and policies in the global stage.