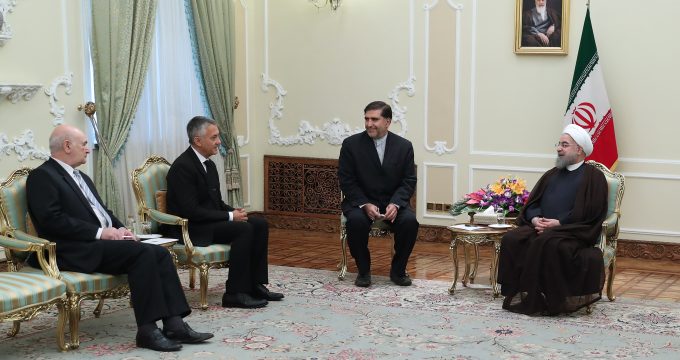 Tehran welcomes cementing ties with Belgrade in all fields

president.ir- President Rouhani met with the new Ambassador of Serbia to Tehran and stated that there is no obstacle on the way of developing Tehran-Belgrade ties.

In the meeting that was held on Wednesday in Tehran, Dr Rouhani received Ambassador Dragan Todorovic’s letter of credence and said: “The two countries can make the best use of the ample opportunities for development of relations in political, economic, cultural and technological fields, as well as tourism to establish closer relations”.

“The Islamic Republic of Iran welcomes closer, friendlier ties with Serbia and considers developing ties in all fields as beneficial to both nations,” he added.

Dr Rouhani also referred to tourism as a base for developing ties between Tehran and Belgrade and said: “The two countries have ample potentials in this field and facilitating tourists’ travel can be very effective in familiarising the two nations and closer ties between them”.

At the same meeting, the new Ambassador of Serbia to Tehran, Dragan Todorovic’s, also presented his letter of credence and delivered his country’s president’s message of congratulations over Dr Rouhani’s re-election, saying: “Belgrade is determined to deepen ties with Tehran in all political, economic, cultural and industrial fields, as well as sport and tourism”.

“The government of Serbia is ready to develop cooperation and relations with Iran in all fields and the preliminary work in establishing good banking ties between the two countries has been carried out,” he said.

He delivered an invitation by the President of Serbia from Dr Rouhani to make an official visit to the country.