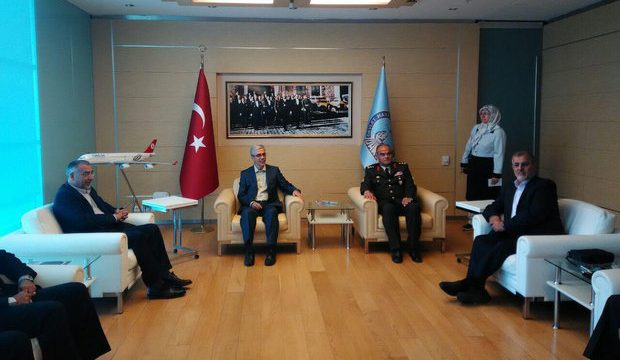 Heading a high-ranking military-political delegation at the invitation of head of the General Staff of the Turkish Armed Forces Hulusi Akar, Major General Mohammad Bagheri arrived at Ankara Esenboğa Airport on Tuesday morning and told reporters that he will confer with Turkish authorities on the issue of fight against terrorism, regional developments, Tehran-Ankara defensive ties, and border cooperation will be discussed during the meetings.

During his three-day visit to Turkey, Chief of Staff of Armed Forces of the Islamic Republic of Iran will hold talks with top-ranking political and military authorities of Turkey, including President Recep Tayyip, head of the General Staff of the Turkish Armed Forces Hulusi Akar, Turkish Minister of National Defense Fikri Işık and other senior authorities.

“We enjoy hundred years of friendship and brotherhood with Turkey and we have a safe and peaceful border,” Maj. Gen. Bagheri said underlining that Turkey is one of the important neighbors of the Islamic Republic of Iran and plays an important role in the region and the Islamic world.

The meetings between the officials of the two countries will focus on military, security and regional issues, border security and countering terrorism, he added.

The Iranian top officer’s Turkey visit is the first foreign trip by a chief of staff of Iranian Armed Forces since the 1979 Revolution.