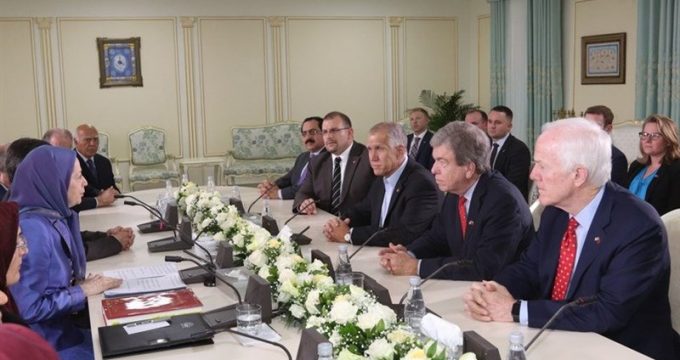 Tasnim – A senior delegation of US senators held a meeting with the head of the terrorist Mujahedin-e Khalq Organization (MKO), Maryam Rajavi, in the Albanian capital, Tirana.

The delegation, Senators Roy Blunt, Vice President of the Republican Conference, and member of the Appropriation, Select Intelligence, Rules and Administration, and Commerce, Science, and Transportation committees; John Cornyn, the Majority Whip, and a member of the Judiciary, Select Intelligence, and Finance committees; and Thom Tillis, a member of the Armed Services, Judiciary, Banking, Housing and Urban Affairs and Veterans’ Affairs committees, also held a meeting with members of the MKO terror group in the Albanian capital on Saturday, Huffington Post reported.

They congratulated the terrorists’ “safe and secure relocation” outside of Iraq.

Back in December 2011, the United Nations and Baghdad agreed to relocate some 3,000 MKO members from Camp New Iraq, formerly known as Camp Ashraf, to the former US military Camp Liberty outside Baghdad.

The last group of the MKO terrorists was evicted by the Iraqi government on September 11, 2013 to join other members of the terrorist group at Camp Liberty and await potential relocation to other countries.