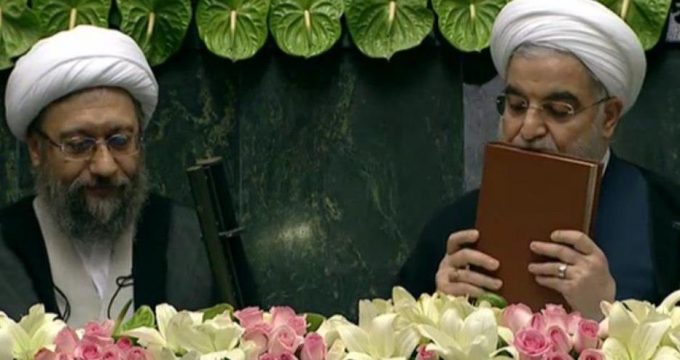 Financial Tribune – Lawmakers believe the huge participation of foreign dignitaries in President Hassan Rouhani’s swearing-in ceremony on Saturday demonstrated the international community’s interest in developing cooperation with the Islamic Republic, despite anti-Iran policies orchestrated by hostile countries, especially the US.

In a recent talk with ICANA, Asghar Salimi said the level of participation was an indication that many countries now are keen on forging collaboration with Iran.

Pointing to the fact that Iran enjoys high security in a turbulent region and promises ample opportunities for investment, the MP said, “[Participating] countries now see their benefits in interacting with Iran.”

Rouhani, who won reelection in a landslide in May by securing 57% of the vote, was sworn in for a second term on Saturday in the presence of dignitaries from over 100 countries and international organizations, including eight presidents, 19 parliament speakers, nine vice presidents and deputy prime ministers, seven deputy parliament speakers, 11 foreign ministers and 35 special envoys from different countries, IRNA reported.

“We gave the message [through the ceremony] that we are ready to have wide-ranging relations with all countries, as the Leader had outlined,” Salimi said.

On Thursday, Leader of Islamic Revolution Ayatollah Seyyed Ali Khamenei formally endorsed Rouhani as president for the second term and called for “extensive interactions with the world as well as broad relations with nations and governments.”

“The ceremony underscores the fact that not only is Iran not isolated, but it has also been able to expand relations with other countries,” he said, sending a signal to the US administration to change its failed policy regarding Iran.

After assuming office, US President Donald Trump has tried to isolate Iran, a policy that especially came to the fore when he paid a visit to Saudi Arabia for the so-called Islamic American Summit in May, attended by 55 Arab and Muslim countries, where he called for Iran to be isolated.

“All nations of conscience must work together to isolate Iran,” Trump said at the time.

“Under the current circumstances where Trump is trying to undermine JCPOA, the presence of so many diplomatic delegations indicates that they lined up in support of the deal,” he said.