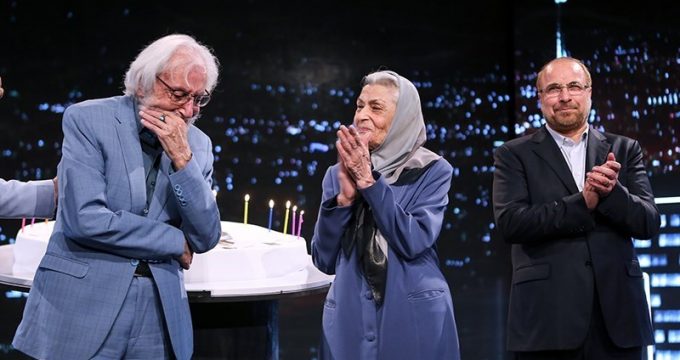 To pay tribute to Olov’s 70 years of artistic career, veteran actor Jamshid Mashayekhi, 82, went on stage and said, “in the late 1940s, radio programs were very popular among the public. On Fridays, there was a program about theater in which Olov had a very effective role. It is my pleasure to stand beside this artist tonight”.

Olov’s 90th birth anniversary was also celebrated at the event with a big cake adorned with her picture.

After reciting a poem, Olov appreciated the organizers of the ceremony and addressing the audience said, “you (people) have always been kind to me. I love my country so much and respect my people. I have lived to this day, just for the love of you”.

Olov is also a dubbing artist and poet. She started her career working in radio and cinema in 1948 and in theater in 1949.

She dubbed cartoons for the first time in Iran with Walt Disney animations including ‘Cinderella’, ‘Pinocchio’, ‘Sleeping Beauty’, ‘101 Dalmatians’, ‘Snow White’ and ‘Aristocats’.

She has played in over 50 films, 30 TV series, 15 plays and also been a voice-over artist in numerous cinematic and TV works.

Her last dramatic appearance was in the epic history TV series ‘Mokhtarnameh’ directed by Davood Mirbagheri, which was aired in 2011.

Cinematographer Mahmoud Kalari, 66, was another honoree at the event. He is known for his cinematography on Oscar winning film ‘A Separation’ by Asghar Farhadi, also ‘The Past’ by Farhadi, ‘Fish & Cat’ by Shahram Mokri, ‘Shirin’ by Abbas Kiarostami and ‘Offside’ by Jafar Panahi.

Also a screenwriter, film director and photographer, Kalari completed photography courses in the US. In 1980 he was ranked one of the ‘15 Best Photographers of the Year’ by Time Magazine, and his photos were published in French, German, and American magazines.

He started film career in 1984 as a cinematographer and since then has shot more than 65 films. His works have attended various festivals across the globe and won him many awards. He has also served as a jury member in several national and international events.

A part of the closing ceremony was dedicated to awarding the winners in the international competition section.

This year’s edition of the International Urban Film Festival presented short and feature-length films, as well as documentaries and animations from Iran, Italy, Brazil, Germany, Sweden, Russia, Spain and Austria among many other countries.

Affiliated to the Art and Culture Organization of Tehran Municipality, the festival ran from July 30 to August 5 at more than ten movie theaters across Tehran.

The annual event aims to improve the quality of city life and urban culture, and protect and promote the Iranian-Islamic lifestyle.