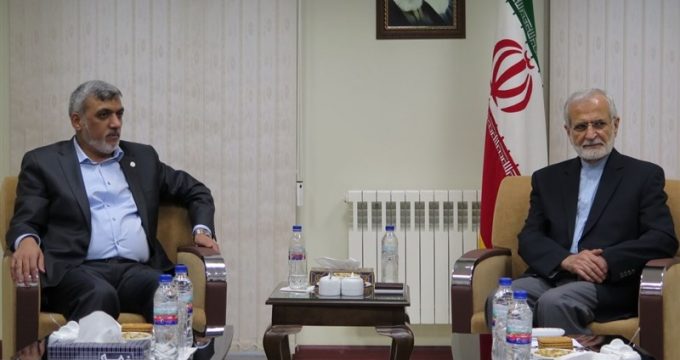 Tasnim – Head of Iran’s Strategic Council on Foreign Relations Kamal Kharrazi described supports for the Palestinian nation as the bottom line of Iran’s foreign policy, saying such backing for the Sunni Muslims indicates falsity of the media propaganda that Iran cares only about Shias.

“The issue of Palestine and support for the Sunni Palestinian brothers is at the forefront of Iran’s foreign policy,” Kharrazi said in a meeting with a high-ranking delegation from the Palestinian Islamic Resistance Movement, Hamas, held in Tehran.

For his part, head of the Palestinian delegation, Ezzat al-Resheq, hailed Iran as the main supporter of the anti-Israeli axis of resistance in the region.

Pointing to the recent flare-up of tensions in East Jerusalem al-Quds in the wake of Israeli violence against Palestinian residents, Resheq praised the unity among all Palestinian groups in the face of the Zionist regime that sought to control Al-Aqsa Mosque compound.

Several Palestinians have been killed and hundreds more injured in recent weeks during mass protests over new Israeli security measures at the al-Aqsa Mosque compound.

Muslims refused to hold prayers at the mosque and prayed in the streets around the Old City for almost two weeks after Israel installed security equipment, including metal detectors and cameras, at the sacred compound following a deadly shooting incident there on July 14.

The occupied Palestinian territories have witnessed new tensions ever since Israeli forces introduced restrictions on the entry of Palestinian worshipers into the compound in East al-Quds in August 2015.