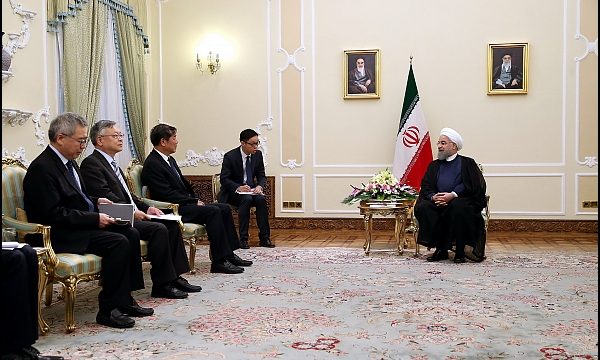 President in a meeting with Chinese President’s special envoy: Iran, China cooperation potentials far more than current level/Iran can be a trustable source for China’s energy

Expressing hope to witness great developments in Tehran-Beijing economic relations, the President said: “We are determined to further deepen relations with the friend country of China”.

“In that past four years, very important meetings have taken place with the President of China and his visit to Tehran started a new level in the two countries’ relations,” Dr Rouhani added.

He also went on to refer to cooperation between Iran and China in oil, gas and peaceful nuclear activities, saying: “Iran is ready to develop cooperation with China in these fields”.

“With regard to negotiations between Presidents of the two countries, Iran is willing to cooperate with China in the field of modern energies and communication technology,” Rouhani continued.

Appreciating China’s positive role in negotiations that led to the JCPOA, he added: “All parties to this agreement must cooperate closely with each other for its full implementation”.

He also went on to say: “Iran can be a trustable source of energy for China. The Islamic Republic of Iran has estimated more than $200 billion for projects in oil, gas and petrochemicals in its 5-year development plan and China can invest in these fields”.

During the same meeting, the Chairman of the National Development and Reform Commission of the People’s Republic of China, He Lifeng, delivered Chinese President’s message of congratulations to Dr Rouhani on his re-election and said: “We are very happy that the Iranian people have had good developments in various fields”.

“I am confident that in your new term of office, we will witness further deepening of relations between the two countries,” continued He, adding that China is against unilateral sanctions, calling for full implementation of the Joint Comprehensive Plan of Action (JCPOA).