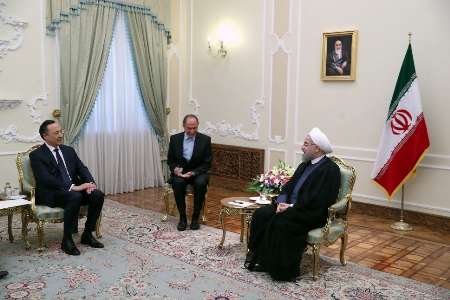 Rouhani: Tehran, Astana to increase cooperation in all fields

IRNA – President Hassan Rouhani said Iran and Kazakhstan will boost ties and cooperation in various fields during the 12th government.

President Rouhani made the remarks Saturday in a meeting with Kazakh Foreign Minister Kairat Abdrakhmanov.

Accelerating the implementation of agreements between Iran and Kazakhstan will benefit both sides and the region as well, he said.

He reiterated that there are many projects in oil, gas and petrochemical fields in which Kazakhstan can invest.

He also expressed Iran’s readiness to transfer experiences to Kazakhstan.

‘Like the Islamic Republic of Iran, we also believe that Caspian Sea should be sea of friendship, cooperation and development.

Iranian government declared one day holiday in the capital, Tehran to prepare the grounds for presidential inauguration ceremony.