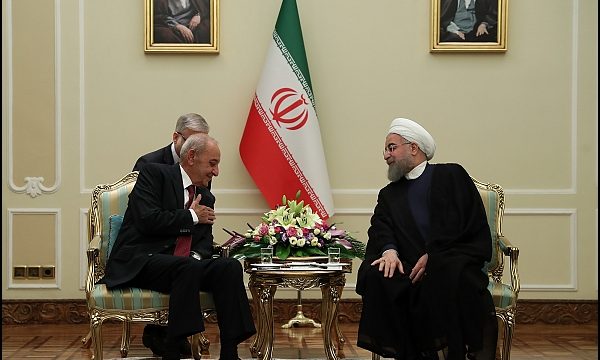 Tasnim – Iranian President Hassan Rouhani reiterated the country’s policy to continue backing the Lebanese people and government and stressed the need for closer ties between the two Middle Eastern nations in all areas.

Speaking at a meeting with Lebanon’s Parliament Speaker Nabih Berri in Tehran on Sunday, Rouhani hailed Tehran-Beirut relations as “friendly and brotherly” and said the Lebanese people have a special place in the hearts of the Iranian people.

He further hailed the unity among Shiite and Sunni Muslims and Christians in Lebanon as a role model for other countries with multiple communities.

“Today, the Lebanese people consider Hezbollah and the country’s army as powers providing security, and the (anti-Israeli) resistance is more popular with them than ever, because the people feel the two major threats posed by Zionism and terrorism…,” Rouhani said.

“The Islamic Republic of Iran has always sided with the government, people, and resistance (movement) of Lebanon and will keep on the same path in the future,” he added.

Berri, for his part, underlined that Iran is currently a powerful and glorious country in the region, adding that the Islamic Republic will never be alone.