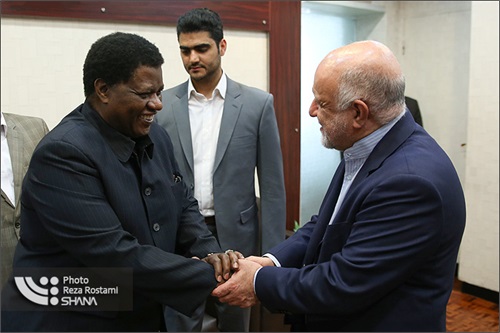 Shana — Iranian Minister of Petroleum Bijan Zangeneh said Namibia has indicated keenness to enhance economic ties with Iran and enjoy the capabilities of Iranian companies in developing a newly-discovered gas field in the African country.

Following a meeting with Namibian Land Reform Minister Utoni Nujoma on Sunday, Zangeneh said the African official announced his country intends to expand the level of its ties with Iran form mere political grounds to economic ones.

Zangeneh said Mr. Nujoma also voiced Windhoek’s willingness to welcome Iranians for developing a new gas field which has been recently discovered in his country, “a suggestion which we endorsed.”

“We asked Namibia to send Iranian companies the field’s data so that after studies, Iran’s private companies start activities over the project,” he added.

Namibia has previously sought cooperation of Iranian companies in building refineries in the country.

“We (the Iranian Ministry of Petroleum) have absolutely no plans for building refineries overseas but would engage in investments for securing our demand,” the Iranian official added.

However, he added, the National Development Fund of Iran can be tapped for receiving loans by private companies for building refineries in other countries in order to ensure long-term sales of crude oil.