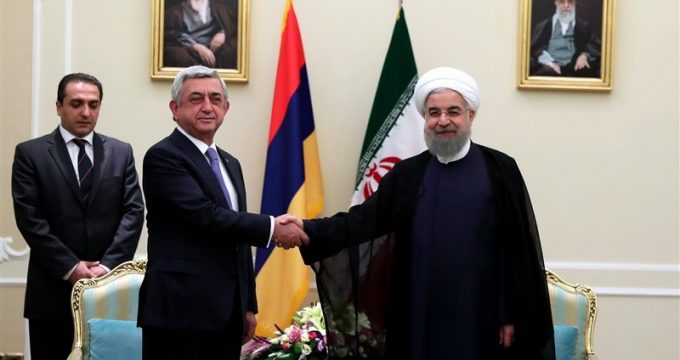 Iran warns of spread of terrorism in Caucasus

Tasnim – Iranian President Hassan Rouhani cautioned that extremist elements could expand their presence in the Caucasus and Central Asia after being flushed out of Iraq and Syria, calling for concerted action to stem terrorism in the region.

“After suffering a complete defeat in Iraq and Syria, terrorists are likely to try to permeate across the region. Thus, all of us should be wary of such a threat (in the region), as in the Caucasus and Central Asia,” President Rouhani said in a meeting with his Armenian counterpart Serzh Sargsyan in Tehran on Sunday.

It is necessary for all regional countries to coordinate efforts in the fight against terrorism, a challenge that threatens the security of the entire region, Rouhani added.

The Iranian president also reiterated that the Nagorno-Karabakh conflict between Armenia and the Republic of Azerbaijan has only “political solutions.”

The Armenian president, for his part, congratulated Rouhani on taking the office for the second term, voicing his country’s readiness to enhance economic relations with Iran.

Sargsyan called for efforts to raise the level of Tehran-Yerevan trade ties, pointing to the opportunities available for cooperation in the energy industry and transportation.

The Armenian president was among more than 130 foreign dignitaries attending President Rouhani’s inauguration in the Iranian parliament on Saturday.