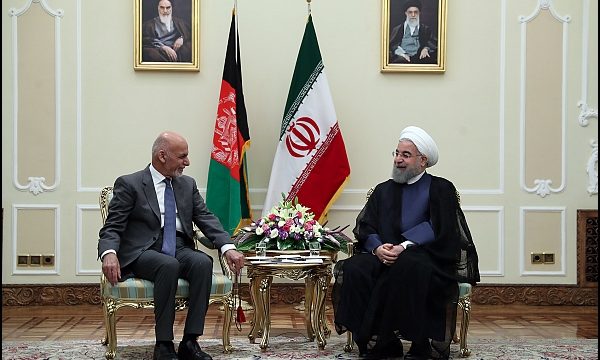 MNA – President Rouhani said Sat. that Iran will spare no effort in helping the people of Afghanistan in increasing and consolidating security and welfare.

Iranian President Hassan Rouhani made the remarks in a meeting with his Afghan counterpart Ashraf Ghani, stressing Iran’s resolve for expanding relations with the nieghboring country, in economy, trade and mining.

“Fortunately, the Islamic Republic of Iran railway has reached Afghan borders and we are willing to witness Iran-Afghanistan borders as the border of friendship and cooperation,” he added.

He also deemed terrorism a common issue for all countries of the region and the world, calling for closer cooperation with Afghanistan in combating this global scourge.

President Rouhani also highlighted the importance of environment protection, saying “if lakes and wetlands along the Iran-Afghanistan borders are not revived, dust storms will make serious problems for all citizens of these areas.”

Afghan president, for his part, congratulated Rouhani on his re-election as Iran’s 12th president, adding “Afghanistan is fully resolved to have sustainable, durable relations with Iran.”

Thanking Iran for supporting the Afghan people and government, President Ghani maintained that the country’s efforts in fighting terrorism have yielded good results and Afghan Army is in good condition for confronting terrorist attacks.

“The government of Afghanistan is ready to cooperate with neighboring countries such as Iran to increase security on its borders,” said President Ghani.

He further welcomed extending railway connectivity between the two countries.