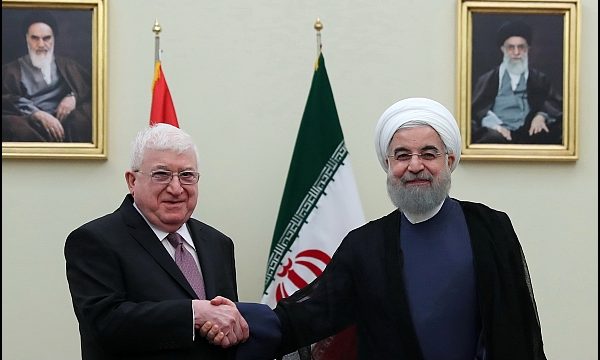 “Maintaining unity and stability in Iraq is highly important to us because the two countries’ security and stability is interwoven,” Rouhani said in a meeting with his Iraqi counterpart Fuad Ma’soum in Tehran on Saturday.

Stressing that Iran wants national unity and integrity in Iraq, he said, “Any change in the geographical borders can create lots of tensions in the region for tens of years. We want a united Iraq and hope that Shiites, Sunnis and Kurds will always have a single voice against the enemies.”

Ma’soum, for his part, called for increased anti-terrorism cooperation with Iran, and underscored his country’s willingness to use Tehran’s experiences to decrease reliance on oil and gas revenues.

In relevant remarks last Sunday, Secretary of Iran’s Supreme National Security Council (SNSC) Ali Shamkhani warned that plots against Iraq’s territorial integrity will pave the ground for insecurity and instability in the country.

“The separatist approaches can prepare the ground for increased greed in enemies and stir insecurity and instability in the country in future,” Shamkhani said in a meeting with Iraqi Defense Minister Irfan al-Hayali in Tehran.

He also underscored Iran’s continued support for the Iraqi people and Armed Forces to establish full security, remove the danger of terrorist groups and reconstruct and develop the country’s cities.

Al-Hayali, for his part, appreciated Iran’s generous support for Iraq in the fight against terrorism, and said, “The Iraqi army confronts any aggression and occupation of the country’s soil independently and relying on the experience that it has gained in recent years and will not allow the start of a new plot by the Takfiri terrorists and their foreign supporters who are after disintegration of Iraq.”