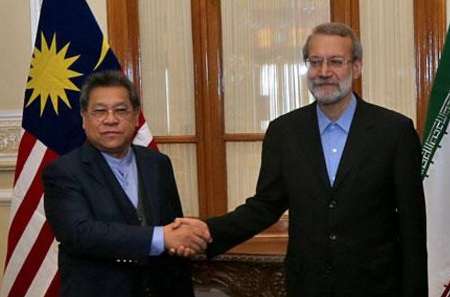 Majlis speaker urges all countries to be sensitive about Palestine

Larijani made the remarks in a meeting with speaker of Malaysian Parliament Pandikar Amin Mulia on Friday.

He appreciated Malaysia for its active participation in recent conference on Palestine in Tehran, saying the Zionist Regime is after disrupting al-Quds population.

He also expressed Iran’s readiness to develop ties with Malaysia in the fields of energy and new technologies.

After implementation of Iran nuclear deal, also known as Joint Comprehensive Plan of Action (JCPOA), grounds have been prepared for cooperation and investment, Larijani said.

He pointed to terrorist and security crises in the region, saying the region is in a chaos as regards security and some countries do nothing to solve it.

Despite all problems in the region, Iran enjoys sustainable security, he added.

Meanwhile, Amin Mulia referred to positive relations between Iran and Malaysia, saying Malaysia has always stood by Iran in Palestine issue and other issues related to Islamic World.