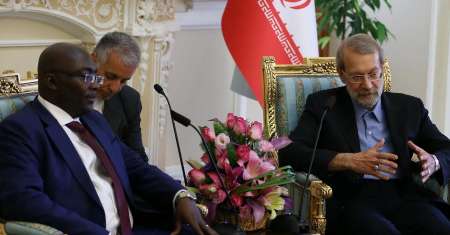 Larijani: Iran’s policy based on bolstering ties with African states

IRNA – Majlis Speaker Ali Larijani said on Friday that given availibility of extensive capacities of Iran and Ghana, Islamic Republic of Iran’s policy is based on boosting cooperation and ties with African states, especially Ghana.

Larijani made the remarks in a meeting with Ghana Vice President Mahamudu Bawumia who is currently in Tehran to attend President Hassan Rouhani’s inauguration.

Referring to the significance and status of Ghana, Larijani added that promoting ties with the African states, Ghana in particular, is on Iran’s agenda.

Larijani also recalled Iranian pharmaceutical companies’ progress in production of medicine, saying the Islamic Republic is prepared to enhance ties with Ghana in that domain.

Both countries also have suitable capacities in the infrastructural projects such as road construction and housing sectors, he said.

Ghana has been a brotherly country for Iran and bolstering collaboration with Ghana has always been on its agenda, added the Iranian parliament speaker.

Bawumia, for his part, pointed to positive and long-standing relations between the two countries and said that given Iran’s significance in the world, Ghana has sent a delegation comprising four ministers to attend in President Hassan Rouhani’s inauguration on August 5.

Hailing Iran’s rich civilization as well as its breakthroughs in science, he hoped for interactions between the two countries in the fields of trade, particularly in oil, gas, steel, agriculture and housing sectors.