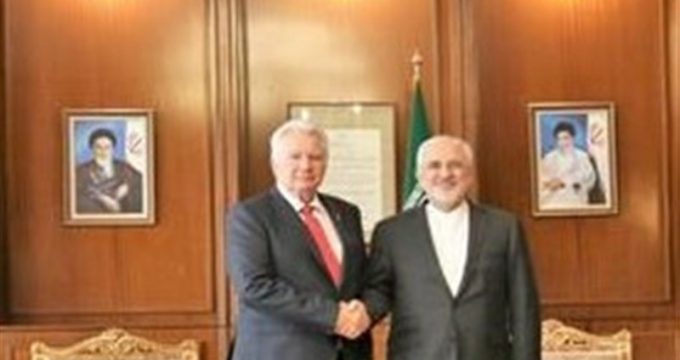 Tasnim – Iran’s Foreign Minister Mohammad Javad Zarif and the visiting Hungarian Vice-Speaker in a meeting in Tehran on Friday explored avenues for boosting relations between Iran and Hungary.

At the meeting, Vice-Speaker of Hungary’s National Assembly István Jakabhas, who is in Tehran to attend swearing-in ceremony for President Hassan Rouhani, expressed his pleasure with the visit to the Islamic Republic.

“We hope you would have a visit to Hungary. We are interested in strengthening the cooperation of the two countries in various fields,” Jakabhas told Zarif.

He pointed to the first joint commission held between the two countries, and noted, “We are eager to boost parliamentary and also economic cooperation, especially in the field of agriculture.”

“The history of the bilateral ties goes back to a long time ago. I hope in the future I would have a trip to Hungary,” Zarif noted, stressing that banking cooperation provides the ground for expanding collaborations in other fields.

The high-ranking officials have arrived in Tehran to attend the swearing-in ceremony for Iranian President Hassan Rouhani.

Back in May, Rouhani won a second term in the presidential election by securing an absolute majority of the votes.

The swearing-in ceremony for President Rouhani will be held at the Iranian parliament on Saturday, August 5.